Beyond Insecurity: A New Approach to Work, Wages and Wealth Distribution | WIEGO Skip to main content

Beyond Insecurity: A New Approach to Work, Wages and Wealth Distribution 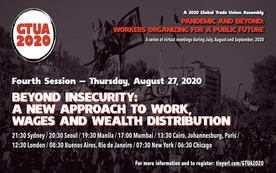 The COVID-19 pandemic has left hundreds of millions of precarious and informal workers on the brink of becoming destitute. In richer countries, some workers have received temporary income support, but many are now under pressure to return to work without adequate protection. With a deep recession looming, an alliance of national and global trade unions and associated support organisations, under the banner of Global Trade Union Assembly, have convened a symposium entitled Beyond Insecurity: A New Approach to Work, Wages and Wealth Distribution.

This virtual symposium which is scheduled for 27 August 2020 will focus on what actions unions can take to encourage a major shift in social and economic priorities. During this session, workers' organizations from the North and South and their allies and partners will have the opportunity to discuss the implications of the pandemic while seeking out innovative ways to strengthen organizing and overall global worker solidarity.

This is the 2-hour virtual event is the fourth of in a series seven webinars, the first of which was held in July. It is expected to attract up to 800 trade unionists.  Informal worker organizations strategies and responses to COVID-19 will be shared during this event.