Working Poor Women are Redefining How to Achieve Gender Equality

For International Women’s Day, WIEGO is launching a month-long series to dive into the lives of women working in the informal economy. We will explore the challenges they face as women, mothers, wives and members of communities who often place restrictions on their earning power in myriad ways. Follow us on Twitter @wiegoglobal.

International Women’s Day is an important opportunity to celebrate the progress women’s rights advocates have made around the world and to be reminded of the challenges that remain. This year’s campaign theme calls for gender balance in all aspects of social life — government, media, sports, community and economy.

Campaign organizers see gender balance as more than a social justice issue; they argue that it’s also a good business case: gender parity has the potential to improve economies and communities along with it. While we welcome the campaign’s call for #balanceforbetter, in some of these communities, the challenges run deeper.

While we welcome the campaign’s call for #balanceforbetter, in some of these communities, the challenges run deeper.

In our work at WIEGO, we see that working poor women in the Global South face a complex set of barriers to equality that go beyond gender discrimination. Women in the informal economy face ingrained social and economic structural barriers. Their lives are shaped by multiple intersecting power relations marked by class, caste, religion, race and ethnicity.

In addition to gender oppression, such forms of discrimination further marginalize these women, making the march toward equality and economic empowerment an even bigger battle — but women from Delhi to Dakar are addressing discrimination in their own game-altering ways.

Recognizing the multi-layered needs of women in the informal economy is crucial in achieving any measurable steps forward, especially given the sheer numbers.

... policy language is often hostile to their very existence ...

Despite their ubiquity, women informal workers still face many challenges. To start, policy language is often hostile to their very existence, and they are seen as the “shadow”, “illegal”, “underground”, or the “black” economy. In cities, the stigmas women workers face can be especially dehumanizing and challenging to address.

Waste pickers, for example, are seen as being dirty and doing “unfeminine” work. Street vendors are criminalized for claiming space in the city to trade their wares. When they trade in the streets with their babies, they are judged as bad mothers, because they cannot afford childcare or take time off work to raise their children. Against this backdrop, both women and men in the informal economy are stereotyped as freeloaders and tax evaders. 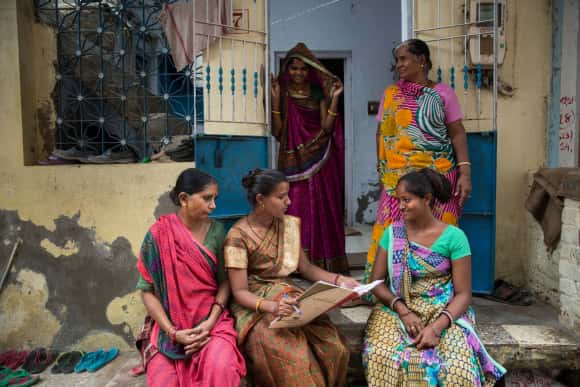 Women are mobilizing to gain a voice in their communities. Photo: Paula Bronstein/Getty Images Reportage

However, women in the informal economy face these ingrained hostilities head on every day.

Moving beyond gender balance and parity allows us to see women's agency and the forms of resistance and contestation they navigate in their daily lives. Poor working women are all too often depicted as passive victims, waiting for policies that provide them an equal footing.

Moving beyond gender balance and parity allows us to see women's agency and the forms of resistance and contestation they navigate in their daily lives.

In fact, in the face of multiple structural barriers, women create livelihoods out of waste; appropriate space in hostile urban environments; and mobilize to demand a voice in the city. In doing this they are redefining the very nature of urban economies, sociality and politics.

We have witnessed the power of women, especially when they unite in collective strength, to creatively and vibrantly resist these multi-layered power dynamics that stand in their way of achieving economic independence and equal recognition. Women’s agency — which involves identifying what choices are available and when and how to act — enables them to envision other possibilities, confront gender constraints and navigate the politics of marginalization.

We have witnessed the power of women, especially when they unite in collective strength, to creatively and vibrantly resist these multi-layered power dynamics.

In this month-long series, we’ll feature stories of women and their organizations on the frontlines of overcoming complex discriminations that poor working women in the Global South face — from social degradations related to their work as waste pickers to stigmas related to women traveling outside the home, even as they need to for work purposes.

Their voices remind us that dignity, recognition, and solidarity are central to their empowerment and improving the security of their livelihoods — and are the driving force to further collective action and creating meaningful change in their lives.

Read our first story in this series: Nazma, a home-based work from Delhi, has been challenging social stigmas she and other women in her neighbourhood have been facing.