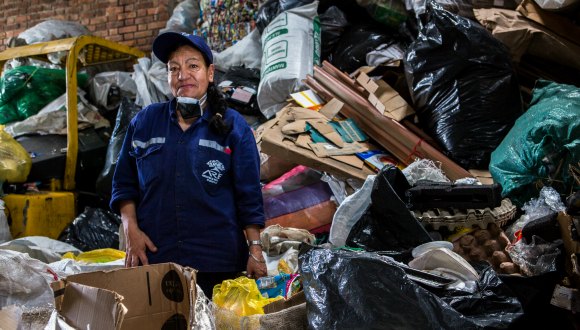 It might be surprising to learn that workers in the informal economy – just like those in formal employment – engage extensively in collective negotiations. This common strategy is one of the most vital in the fight for workers’ rights and yet it is often seen – even by trade unionists – as limited to those with a traditional employer-employee relationship.

From this perspective, most informal workers lack opportunities to negotiate collectively, being self-employed (such as many street vendors and waste pickers) or having disguised or unclear employment relationships (such as many homeworkers). Even where they have an employment relationship, they are often excluded from collective negotiation provisions, in law or in practice. However, through their membership-based organizations (MBOs), informal workers are waging a struggle on many fronts and in many spaces, from local to global, to achieve workers’ rights, including the right to collective bargaining, and to protect and advance their economic and social positions through negotiations.

Here, we share a few lessons we’ve learned along the way and propose a series of steps that organizations can take to be successful in collective negotiations – in whatever form they may take. These strategies can be adaptable for a variety of sector or geographical needs.

Starting with a Strong Voice: Organizations Need Unity and Allies

A prerequisite for any negotiation to take place is having an informal worker organization – preferably a strong and representative MBO – with real or perceived power to reach and enforce an agreement.

Where there are multiple organizations in the constituency, forging unity among them is very important. This can be through permanent or temporary alliances, or through mergers. In the case of street traders in Monrovia, during an engagement with Monrovia City Council, two associations of “petty traders” merged to form one union, the National Petty Traders Union of Liberia (NAPETUL), strengthening their position.

Having the support of allies such as trade unions or NGOs can contribute to success. Allies can open up institutional doors, assist with advocacy and publicity, provide information, formulate arguments, and help build negotiating skills and capacities. However, it is important to ensure that the MBOs “speak for themselves” and are not replaced by their supporters.

So, one essential factor in any successful negotiation is identifying the appropriate level at which to negotiate and the negotiating counterpart(s) that have decision-making power over the workers’ demands. And, crucially, ensuring they are the ones around the table. This is often a stumbling block when negotiating with government: different departments are responsible for different functions, e.g. police for enforcement of regulations, business departments for allocating licenses, and so on.

Where there is no ready or obvious counterpart, the challenge is to create one. This is a big issue for domestic workers working individually for individual employers. While there are examples of domestic workers’ unions negotiating with national governments to change the law, there are fewer examples of negotiations with employers. In Uruguay, a tri-partite negotiating council was formed with La Liga, a housewives league initially established to promote the dignity of housewives and defend consumer rights, taking on the role of representing employers.

Where strength and unity are not present in and among the MBOs, it does not preclude attempts to influence the “other side”. Ad hoc negotiations often take place when an immediate conflict needs to be resolved. Different forms of engagement such as a dialogue, a round table, regular informal meetings, or a workshop format are often used and can be important steps towards later, fully-fledged and representative negotiations.

HomeNet Thailand, for example, facilitated dialogues with home-based workers, their communities, bus companies, government agencies, and others in Bangkok on transportation issues. Home-based workers had been relocated to the outskirts of the city but needed to commute to the centre to buy materials or deliver finished goods. As a result of the dialogues, bus services to the centre were improved.

There are many examples of different forms of engagement among StreetNet affiliates. WIEGO has helped set up different types of platforms and built the capacity of informal workers to present their positions and engage with local authorities in many cities and localities. In Accra, Ghana, market traders have been able to make their concerns heard by local authorities and with political parties

Ideally, informal workers would have formally constituted and regularly convened negotiating forums enshrined in law. This would help ensure that negotiation platforms and agreements reached would not be constantly ignored or disrupted by political changes. This is particularly relevant for negotiations with local government. To date, there are few examples of such forums nationally or locally. There is some progress in India, where the Street Vendors (Protection of Livelihood and Regulation of Street Vending) Act, 2014, was promulgated after a long struggle by SEWA and the National Association of Street Vendors of India (NASVI). This includes a provision for statutory Town Vending Committees where negotiations can take place. The Committee should ideally be made up of 40 per cent street vendors (33 per cent women) and should have clear terms of reference on how they should operate.

What Works At the Negotiating Table

Good planning and preparation are key to successful negotiations. Issues for negotiation have to be identified and supported by the members, and objectives, demands, or proposals need to be clearly formulated. Before formulating detailed strategies and tactics, the MBOs need to assess their own strengths and weaknesses and the balance of power. They need to assess the context and history, as well as identifying opportunities and threats posed by the “other side”. Detailed tactics, prepared with the negotiating team made up of MBO leaders, should include arguments, positional movement and bottom line, negotiating approach (e.g. more adversarial or more conciliatory), and negotiating team members’ roles, among others.

The types of strategies available as part of or to support collective negotiations depend, in part, on the characteristics of the sector and the type of worker. Debbie Budlender identifies a variety of strategies used in five case studies. These include carrying out research, using litigation where there is a dispute, and ensuring that all agreements are produced in writing.

Framing issues so as to elicit support from decision-makers was a strategy used by waste pickers in Brazil through linking into a current political debate (sustainable development, including debates about inclusion and against incineration), and by SEWA in India, using the vulnerability of poor women homeworkers to argue the case. Similarly, domestic workers in their global campaign and negotiations for Convention C189 used emotional pressure and imaging backed by research that made it seem immoral to deny them their rights.

While the strike weapon is not always appropriate for informal workers, pressure tactics such as demonstrations, marches, and other forms of collective action are widely used to call attention to demands, gain public support, and demonstrate power. Often multiple strategies are used to achieve a favourable outcome, as in the struggle of waste pickers in Bogota, led by the Asociación de Recicladores de Bogotá (ARB). Legal strategies played an important role and were combined with research to provide an evidence base in negotiations, advocacy, pressure tactics such as large demonstrations, publicity, and linking into current political causes (e.g. environmental).

Collective negotiations are based on principles of representativeness and accountability. The negotiating team, therefore, should be made up of informal worker leaders, including women with equal role and voice, who speak directly for the members based on their mandates. Making sure that members are consulted throughout the negotiating process, as regular report-back and mandating keeps negotiators in line and helps maintain the support of members throughout as well as mobilized and ready for action if needed. Obtaining original and new mandates is not always easy given various constraints in convening meetings or in communicating, but all efforts and creativity should be employed to do so. In the booklet, Collective Negotiation for Informal Workers, some suggestions are made on how this might be done, including using ever-expanding technologies.

Finally, the purpose of a collective negotiation is to reach an agreement that improves the situation of the informal workers involved. When agreement is reached, it should be recorded in writing. The agreement should be correct, clear, and easily understood. Words can be manipulated or misinterpreted, sometimes deliberately. As workers themselves are best placed to monitor its implementation and take action to enforce it, they should be fully conversant with its provisions. And where there is no agreement, then an appropriate strategy is needed to resolve the dispute: for example, worker action, third party intervention, continued negotiations, or legal action.

Read more about collective bargaining in the informal economy.