In India, Pune’s Poorest Operate One of the World’s Most Cost-effective Waste Management Models | WIEGO Skip to main content

In India, Pune’s Poorest Operate One of the World’s Most Cost-effective Waste Management Models

A Q&A with Lakshmi Narayan

As cities across the globe struggle to find efficient, cost-effective ways to manage waste, the women waste pickers of Pune, India, have launched a pioneering way forward.

Waste pickers are among the poorest and most marginalized residents in India’s cities. To improve working conditions in Pune, the workers organized into a 9,000-strong union of waste pickers, called Kagad Kach Patra Kashtakari Panchayat (KKPKP), and in 2005, some members came together to form a cooperative, SWaCH, to bring their highly valuable skills in collecting and sorting waste to Pune city officials.

SWaCH, by its very presence, continually challenges the contractor-based, centralized, capital-intensive, exploitative models dominant across the rest of the world.

The Pune Municipal Corporation (PMC) agreed to partner with the cooperative. With the deal, SWaCH workers collect waste door-to-door for a fee that each serviced household pays directly to the worker. They also gain access to recyclables, which they can sell for further income. Unlike in other cities that have tried pro-poor models, Pune does not have to pay wages. The user fees, as well as sales from recyclables collected on their routes, have boosted earnings for these women workers. And the PMC, meanwhile, saves money — a win all around.

The partnership has had a transformative impact on the city, the environment and, importantly, on the lives of the women waste pickers, who now receive a regular and reliable income in a more professionalized environment. Also, Pune now has one of the highest rates of segregation and recycling in the country.

Today, SWaCH waste pickers run one of the most cost-effective, pro-poor municipal solid waste management models in the world. We spoke with Lakshmi Narayan, co-founder of SWaCH, about the model, why it works, what makes it a game-changer and why other cities need to take notice.

What are three ways in which SWaCH's intervention is an example of "urban transfoation"?

Firstly, SWaCH is a proof of concept that poor, illiterate informal workers can step up to provide formal, efficient and accountable services, while also fundamentally transforming their terms of work, given the right policy framework. It also establishes that waste pickers are quicker to adapt their work and services towards higher environmental goals than citizens and municipalities.

Not to mention that it is also much more cost-effective than centralized systems for collection of user fees, which rely on agencies or middlemen who add their own fees.

Secondly, SWaCH is a living example of how relationships between the privileged and the marginalized in any urban landscape can be transformed to one of dignity, respect, and mutual understanding, thereby serving the mutual interests of both and strengthening the integrative fabric of society in the process.

Lastly, SWaCH is a beacon for urban environmental movements, transforming solid waste management in Pune into a low-cost, community-driven system. By its very presence, SWaCH continually challenges the contractor-based, centralized, capital-intensive, exploitative models dominant across the rest of the world.

Fundamental to SWaCH’s model is the collection of user fees from households, which has caused controversy at times. Can you talk more about why this fee is so important?

The collection of user fees directly from citizens is a contentious issue even today.

Service recipients collecting direct charges regulated by the city from service providers is, by definition and logistics, a transparent and accountable system where each party knows what they are paying for and receiving. This transaction bonds the two parties in ways that go beyond the mere collection of the fee and provision of the service. Importantly, it levels the caste, class and gender differences between the two and brings them to the table as equals.

The payment doesn’t, of course, lead automatically to a respectful relationship between the two, but it certainly changes the citizens’ perception of waste pickers as service providers. Not to mention that it is also much more cost-effective than centralized systems for collection of user fees, which rely on agencies or middlemen who add their own fees. 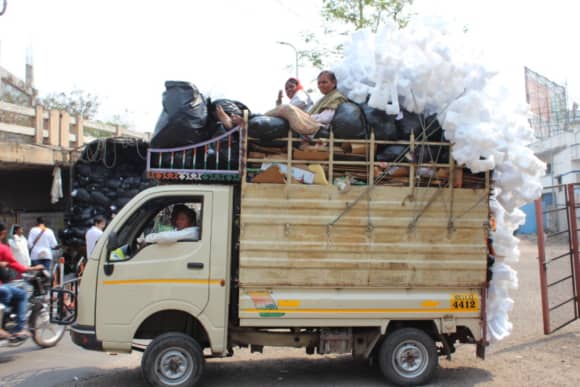 The integration of waste pickers into Pune’s waste services has had a wide impact on improving livelihoods, on reducing costs for the municipality and, of course, on the environment. You’ve even documented the millions of dollars Pune waste pickers save the municipality in waste-handling costs. Why haven’t cities across India adopted this idea?

Many cities across India have already gone down the one-way street of outsourcing their waste-collection contracts. This route not only costs more, but also compromises on environmental standards (using motorized collection systems, reducing waste-segregation levels) and labour regulations (underpaying, undercutting, exploiting workers), to some measure.

SWaCH is a logistically more engaging model; it presumes higher levels of interaction between the various players and key stakeholders.

Municipalities do not find it easy to reduce higher taxes or fees once instituted, and contractors themselves are a very powerful lobby that will not naturally wither away without sufficient political and administrative will. This is one big reason why the SWaCH idea hasn’t caught on.

The other reason is that SWaCH is a logistically more engaging model; it presumes higher levels of interaction between the various players and key stakeholders. Such democratic processes take time, energy and negotiation, as they are detail oriented and not quick fixes. The municipality, however, is simply seeking to outsource one of its key roles with minimal distraction and time to the lowest bidder.

What are some of the biggest road blocks to integrating waste pickers?

Waste pickers are the most marginalized along several parameters of the urban poor. They are the ultimate byproducts of a capitalist system, where some live off others’ waste.

Despite the resilience that has helped them survive, waste pickers pose a unique challenge to organizing. Most are illiterate and have little trust in the government systems and citizens that have disenfranchised them. They rightfully question every system, option, and change through their lens before validating it.

To distill through their very many basic yet individual requirements and arrive at consensus on reasonable, justifiable, workable demands from the state, citizens and from each other requires high levels of engagement, discussion, articulation, argumentation and dynamic decision-making.

Their work is typically flexible, autonomous and entrepreneurial, and, therefore, organizing collectively for mutual benefit is an idea they are willing to engage with only after the highest levels of scrutiny at a very specific, customized, personal level.

To distill through their very many basic yet individual requirements and arrive at consensus on reasonable, justifiable, workable demands from the state, citizens and from each other requires high levels of engagement, discussion, articulation, argumentation and dynamic decision-making. Above all, it requires time, which is in short supply in a fast changing solid-waste management scenario.

Although they recognize that adapting is the key to surviving, waste pickers’ abilities to adapt are seriously hampered by rigid contours of state engagement, and by citizens’ perceptions of visibly clean cities overriding the more fundamental requirements of environmentally sustainable systems. 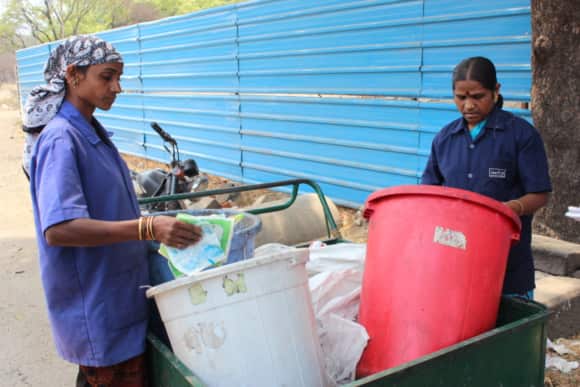 It seems like 2016 was a game-changing year for SWaCH: serviced households increased by 50 per cent and the number of integrated waste pickers increased by 40 per cent. Could you talk about how this happened?

The year 2018 has proven to be an even bigger game changer with coverage rising to 8.1 lakhs (810,000) — of which an expansion in coverage of 1.5 lakhs (150,000) was achieved in less than two months. This demonstrates, once again, that where there is a will, there definitely is a way.

The critical issue and concern here is “whose” will and “which players” in the system have enough stakes to fight the aggressive contractors and complicit administrators.

The critical issue and concern here is “whose” will and “which players” in the system have enough stakes to fight the aggressive contractors and complicit administrators to ensure the continuation of a model that ostensibly offers a fair return to all, without favoring a few at the cost of others.

What are SWaCH’s two biggest achievements since its beginnings?

What sets SWaCH apart is the ability to layer the core model with several value-added services that have generated and sustained high levels of employment and offered cost-effective, environmentally robust solutions, including:

The goals of the coop are to be a successful “efficient, responsive and accountable organization”. What is involved in building waste pickers into successful waste entrepreneurs?

Waste pickers are entrepreneurs. The cooperative facilitates that process and encourages them to come together and bargain collectively in the marketplace to create fairer mechanisms of work that benefit them individually and collectively.

The coop needs to be accountable to the city, with which it has a formal contract; to the citizens, who are the service recipients; and to the members, who are its stakeholders and owners and whose self interest it needs to protect while ensuring a good service.

Going forward, what is SWaCH’s plan to ensure a self-sustainable social enterprise? How will you measure this success? What have been some of the achievements in this area already?

SWaCH is already a self-sustainable enterprise, as it provides a solid waste management solution to the city that costs less than one-fifteenth of what it costs any other city.

Further, it has managed to institute systems for internal financing and ownership by creating mechanisms for service charges from members, as well. It has actually functioned for a full two years with no formal partnership or arrangement with the city and at no cost to it, and lost less than 20 per cent of the overall clients it was servicing.

The cooperative facilitates that process and encourages them to come together and bargain collectively in the marketplace to create fairer mechanisms.

The question SWaCH is increasingly asking itself and the city, however, is whether it has to prove its sustainability any more when the city rushes blindly to provide unsustainable, expensive services in solid waste management and other sectors. Or whether it is now the city’s turn to prove it is ready to engage with the model and help tweak it on fairer terms, where the informal sector need not subsidize the city in any way, while offering a good solution. 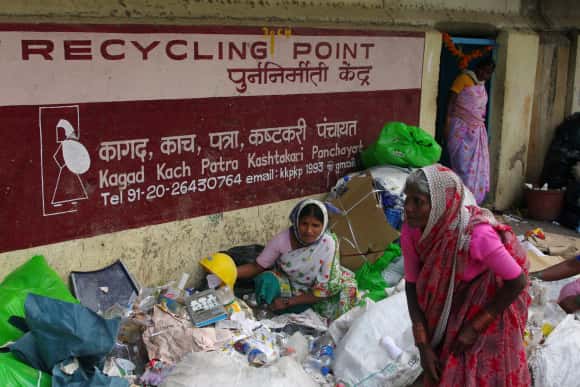 How is SWaCH sharing its model to inspire other cities to partner with waste picker organizations?

A good amount of nuanced sharing has happened as cities have approached the Pune Municipal Corporation and SWaCH in search of alternatives to their mainstream models once they begin to implode.

It provides a solid waste management solution to the city that costs less than one-fifteenth of what it costs any other city.

Also, several national and international agencies have contacted SWaCH, both to document and share the story. This has given other cities and waste picker groups the opportunity to be inspired by how Pune’s waste pickers perceive themselves and to learn more about the empowering nature of the model here.