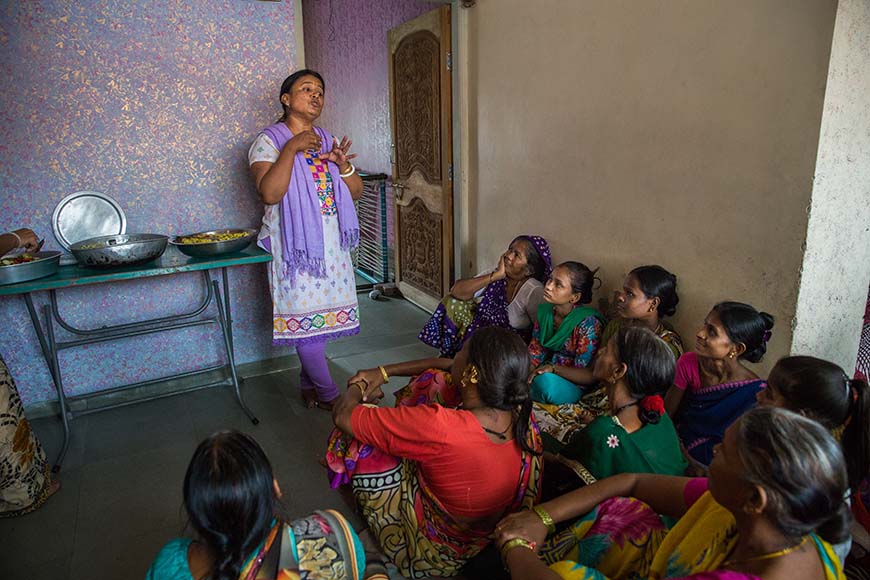 In India, the government has put in place well-meaning social security schemes, as well as health and nutrition programmes to combat malnutrition and increase health and well being in India. For the poor, these basic-needs schemes are especially important, but often unknown to them. SEWA's model worker empowerment centers address the challenges of delivery promising social-benefits schemes to those who need them most.

India’s Self Employed Women’s Association (SEWA) has led the fight for women informal workers’ rights in India for over four decades, and its most recent initiative focuses on the reinvigoration of a mode of empowerment the organization has used for several years.

The SEWA Social Security team decided to adapt the worker facilitation centres established by SEWA Delhi and Madhya Pradesh, known as SEWA Shakti Kendras (SSKs), with an important refocus on connecting workers to government social security, health, and nutrition programmes to which they are entitled. The SSKs launched by the Social Security Team since 2015 have implemented a number of important innovations around accessing health and social security.

#1 An important new focus on social services and social security

The focus on social security and social services, such as health and child care, is an important one. Informal employment is often characterized by low and insecure incomes, precarious working conditions, and high exposure to risk. Social and labour protections, which typically help formal workers to manage risk, usually elude these workers. Also, in India, spending for health service provision is low – less than two per cent of GDP.

Yet workers face many challenges in accessing the highly bureaucratic schemes – if they even know about their existence.

However, the government has put in place myriad social schemes – including the Integrated Child Development Scheme Centres (ICDS centres), National Social Assistance, the Rashtrya Swasthya Bima Yojana (RSBY) health insurance programme, and India’s food aid programme – which could provide immediate and tangible benefits to many of SEWA’s poorer informal workers. Yet workers face many challenges in accessing the highly bureaucratic schemes – if they even know about their existence.

In addition to connecting workers to these important schemes, the new wave of worker facilitation centres have a focus on health, nutrition, and food security, and, in their holistic approach, run health and nutrition education sessions, conduct basic diagnostic health assessments with onward referrals to health facilities, link into SEWA’s child care cooperative, and ensure that those who qualify have better access to the government services and programmes. Over the course of 2017, the team will add a specific focus on occupational health and safety education, mental health, and tackling non-communicable diseases.

#2 Centres, rather than door-to-door workers

The SSKs represent a change as well for the mode of operating. Previously, SEWA’s community health workers went door-to-door to deliver health information and education; now, they are now situated in a central space where people know they can always be contacted and where they are convenient to workers. The central location operates during convenient hours to meet informal workers’ needs, which is important in ensuring the centres are successful.

#3 Accompaniment, as well as education and information

In earlier models of the SSKs, the community health workers mostly gave out information about government schemes. Now, they actually accompany workers throughout the whole process of accessing health and other social protection entitlements. They provide information, assist with filling out forms, and help with getting documentation ready. When forms have to be submitted or when workers have to access health services, the community health workers accompany SEWA members so that they can deal with any problems or difficulties that arise.

In re-launching the new SSKs, SEWA focused on the education and empowerment of the community health workers, since they are the true bridge between the community and the government. In order to accompany workers effectively through the system, the selected leaders needed to learn about the different government departments involved in the provision of social services and social security. They also learned which department is responsible for what, which forms and documents are necessary, and who in each department should be contacted for what purposes.

SEWA focused on the education and empowerment of the community health workers.

In the training stage, health workers were accompanied by their supervisors to the government departments so that they could learn through doing and get used to interacting with officials. This was not something that came easily to many of the women who, although comfortable interacting with their own communities, found it difficult to interact with state authorities.

“I cried the first time I had to go and talk to a government official,” said Ranjanben, who worked as a health worker on the first pilot round of the SSKs in Gujarat.

The work with the supervisors slowly built the confidence of the health workers to communicate with the state officials, until they were comfortable enough to do the work on their own.

“This kind of practical experience is so important. We used to just send people to the government departments; we didn’t have actual experience of what they were facing, and now we do,” says Susan Thomas, Head of SEWA’s Health & Childcare Team.

The SEWA health workers try to maintain an almost constant dialogue with the officials in order to reinforce their relationships by reporting on problems and progress and following up after any joint activities that have been run. They also invite officials to run government programme campaigns from the SSK offices, and invite government officials to participate in direct dialogues with workers.

“This is a centre which is trying to bridge the gap between the government and the community, both of them understanding each other’s issues and each other’s problems,” says Susan Thomas. “Enabling that kind of communication channel is very important.”

Top photo: Ahmedabad, India: Padma, a representative from the Self Employed Women's Association (SEWA), a trade union for poor, self-employed women in the informal sector, leads a nutrition programme for mothers at the BALSEWA Center. The Center holistically addresses issues for women working in the informal sector by providing affordable daycare, health check-ups and educational programmes. The Center's daycare allows SEWA members to earn essential income for their family while keeping their children in a safe educational space. Paula Bronstein/Getty Images Reportage.