How Cities Can Achieve Public Space for All 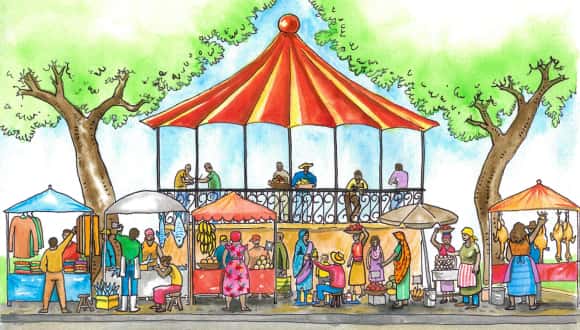 Public space provides a window into the soul of a city. It is where collective urban life plays out — cycling to work, playing in a park, enjoying hot food from a street corner, performing music for a tip, coming together in celebration or resistance. This diversity of activity can make public spaces rich, but it can also make managing public space difficult.

This diversity of activity can make public spaces rich, but it can also make managing public space difficult.

Most urban authorities recognize that everyone should be able to access public space, whether it is for transportation, leisure, or earning a livelihood. However, cities across the globe face common challenges in making public space for all a reality.

For example, intense pressures to raise local revenues can lead cities to privatize public space, reducing the amount available to the public. Also, varying interests in, and visions for, public space from city residents can result in conflict that falls on urban authorities to manage.

In many cities, conflict around public space affects informal workers.

Often, vocal groups like residents’ associations, business groups, and urban mobility advocates call on urban authorities to reduce or eliminate the number of informal workers in public space to clear pedestrian walkways or eliminate perceived business competition. Sometimes the push comes from the city authorities themselves, often with the aim of creating a city with a more “modern” or “world-class” image.

Informal workers who work in public spaces play a central role in urban economic and social life in cities around the world — both in the Global North and South. In some cases, these workers are preserving centuries-old cultural traditions; at the same time, their work is thoroughly modern — with linkages to formal businesses and even to global supply chains.

Their work is thoroughly modern — with linkages to formal businesses and even to global supply chains.

Informal workers are often misunderstood and undervalued, and negative stereotypes and myths about their work persist, including, for example, that they evade taxes, shirk regulations, and create public health risks and unfair competition. These narratives are often deeply entrenched in the public imagination and can motivate calls to remove informal workers from public space.

Although there is no one-size-fits-all solution to the challenge of managing public space in an equitable way, experiences from cities big and small — from New York City to New Delhi — reveal lessons on what works and what doesn’t.

These learnings informed a new set of resources on supporting informal livelihoods in public space.

Through a recent project, “Public Space for All,” with the Cities Alliance Joint Work Programme (JWP) on Equitable Economic Growth in Cities, the WIEGO Network explored some of these experiences through consultations with informal workers — primarily street vendors — policymakers, and other stakeholders in our five Focal Cities: Accra, Ghana; Dakar, Senegal; Delhi, India; Lima, Peru; and Mexico City, Mexico.

These learnings, combined with our existing knowledge base and our experience with informal workers’ organizations in cities, informed a new set of resources on supporting informal livelihoods in public space.

Exclusionary practices like these serve to push already-vulnerable workers deeper into poverty.

These resources include a discussion paper, a toolkit for urban planners and policymakers, and a worker education manual for street vendors. Together, these resources outline guiding principles and practical actions that can help cities build a more inclusive path forward.

We have included some of these lessons below, but first we’ll look at some trending exclusionary policies and why they don’t work.

Many cities have taken a zero-sum approach to clearing public spaces of informal workers with little or no dialogue, partnership, or understanding of on-the-ground realities. Experience shows that these exclusionary policies and practices are not a solution, and, in fact, they can make an already difficult situation worse.

Evicting street vendors from public space: Evictions are a lose-lose policy response to the challenge of managing the use of public space. These policies can have an enormous negative impact on street vendors’ earnings and the well being of their families. In addition, these costly operations cut into city coffers, hurt consumers who depend on vendors for essential needs, and, most often, simply aren’t effective in keeping spaces clear.

They are designed without the intimate knowledge that vendors have.

In the Central Business District (CBD) of Accra, Ghana, for example, “decongestion exercises” are frequently carried out to clear vendors from the area. After these exercises, the vendors have consistently returned to their previous locations, out of necessity or lack of better options, and the cycle of evictions begins again.

Evicting street vendors can also make cities less desirable places to visit, which can negatively impact the local economy in multiple ways. For example, relentless evictions in Bangkok, formerly a site of good practice for the inclusive management of public space, have diminished the city’s reputation as a world-class destination for street food. A lull in tourist traffic could hurt formal businesses and reduce city tax revenue.

Other exclusionary practices, such as confiscations and harassment from local police or task forces, are similarly ineffective and damaging to vendors’ livelihoods, in addition to often being unlawful. Indeed, in South Africa in 2015, street vendor John Makwicana presented a legal challenge to the confiscation of his goods and won.

Most importantly, exclusionary practices like these serve to push already-vulnerable workers deeper into poverty, rather than harnessing the poverty-alleviation potential of policies that support and enhance informal work.

Read about how a South African street vendor won a precedent-setting court victory.

Taking decisions that affect vendors without their input: City planners, often with good intentions, have tried to create solutions to the dilemma of public space management without consulting street vendors. One of the most common responses is the designation of specific spaces for vending and the relocation of vendors to these spaces.

Managing public space should be a commitment to better understanding the contributions of street vendors’ contributions to cities.

These solutions typically fail, as they are designed without the intimate knowledge that vendors have about their customers, pedestrian flows, and optimal spots for making sales, and, as a result, are not responsive to their needs.

For example, in Accra’s CBD, vendors were evicted to make room for Makola Mall. Authorities assured vendors they could be accommodated in the new structure, which was designed without their input. Today, large areas of the mall are empty. Vendors could not afford expensive rents, and the spaces on upper floors of the mall were not appealing to them due
to lack of foot traffic. They needed ground floor space to be able to access a regular customer base.

Urban authorities have the opportunity to create more vibrant, equitable cities with and for informal workers, but an inclusive agenda can only take shape when those impacted on the ground have a voice in identifying ways forward that actually work. Although each city must adopt its own unique approach to the challenge of managing competing claims to public space, the following guiding principles should apply:

Persisting negative narratives can act as blinders in preventing policymakers and others from seeing the ways in which informal workers make cities run better — through contributing to the revenue base with value-added tax (VAT) and other fees, creating demand for goods and services from informal and formal businesses, enhancing food security and public safety, and making cities more desirable places to visit.

Work with street vendors to find and implement solutions: Recognition alone is not enough. An inclusive regulatory framework is needed to protect street vendors’ livelihoods and promote their positive contributions to cities. There is no perfect regulatory framework model that can be taken from one context and applied directly to another, although notable good practice examples exist.

One promising example is India’s Street Vendors (Protection of Livelihood and Regulation of Street Vending) Act, 2014, which establishes an inclusive framework based on the core principles of recognition and accommodation. It acknowledges the positive roles vendors play in cities and commits to accommodating existing vendors.

A key feature of this model is a statutory participatory governance structure in the form of Town Vending Committees (TVCs), which bring together vendor representatives with city officials and other community stakeholders to play an ongoing role in defining plans for accommodating street vendors and monitoring implementation. Although implementation of the street vendors’ act in India has been weak to date, there is much to be learned from this model, especially as Delhi moves forward with elections for town vending committees this year.

Future cities for all

To develop a regulatory model and overall approach that is responsive to individual city needs, it is critical to involve street vendors and other affected stakeholders in the process.

Participatory processes that involve stakeholders in the design as well as the ongoing governance of public space management have the potential to create buy-in, trust, and accountability, and ultimately result in more sustainable and mutually beneficial outcomes.

Mediating competing claims over public space may be challenging, but the potential of multi-use public spaces to create future cities that are more appealing, safe and inclusive is enormous. The true “world-class city” must be one where public spaces work for everyone.

Although there are many informal workers in public space, this project focused specifically on street vendors. See the next blog in this series to learn more about strategies used by workers’ organizations in the WIEGO Network to defend the right to vend in public space and to access a workers’ education manual that was developed through the project, “Public Space for All.”