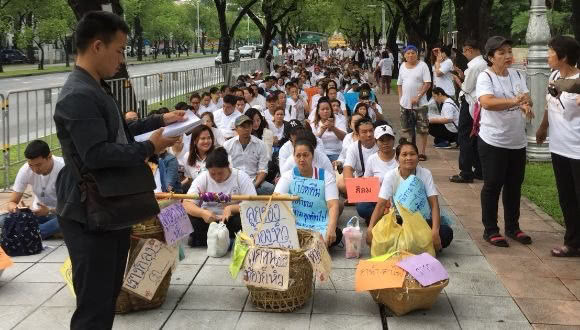 After relentless evictions against their livelihoods, on 4th September 2018, Bangkok street vendors marched on the government house to demand a halt to these actions. The march was led by a new, city-wide street vendor organization that has recently expanded in numbers, allies, and voice, and is calling on the Bangkok Metropolitan Authority to negotiate a way forward.

On 1st August 2018, Bangkok’s world-famous tourist mecca of Khao San Road – known day and night for its lively mix of street vendor goods – fell eerily quiet. A new order from the Bangkok Metropolitan Authority (BMA) banned vending on Khao San before 4:00 p.m., and severely restricted the area’s evening selling spots. Similar restrictions were rolled out in several other markets across the city.

The order was the latest phase of the city’s war on its own: its globally renowned street vendors.

Many of these vendors have been selling in the same spot for decades, and rely on their earnings to support themselves and their families. Earlier this week, the vendors called an emergency meeting to discuss the increasingly challenging situation, and decided to quickly organize a march to fight back. Nearly 1,200 vendors took to the streets to call on the BMA to work together on a solution. The new network’s efforts and open letter to the government have gained widespread media attention – and unprecedented support both locally and globally.

Since 2014, the BMA has cut the number of formally licensed vendors by more than 17,000. Many of these vendors have lost their livelihoods, severely impacting entire families who rely on their earnings. Bangkok’s citizens have lost of hundreds of iconic, well-loved markets that affordably supply their daily needs.

Over this period, officials have occasionally offered vendors the opportunity to propose their own vending plans to address concerns, such as the need to make space on pedestrian walkways, but the BMA has not responded to any vendor-developed proposals. In fact, what has happened instead is a rising tide of vendor evictions across the city.

In fact, what has happened instead is a rising tide of vendor evictions across the city

Even with this trend, Khao San always seemed like a safe place for vendors. Khao San Road Vendors Association is one of Bangkok’s oldest and strongest vendor organizations, and has staved off more than one eviction threat from successive city governments. In 2017, following an international media outcry about the city-wide evictions, the BMA assured the public that the tourist hubs of Khao San and Yaowarat roads would be spared. But their promises have proved to be empty, and left both long-term vendors and globetrotting tourists perplexed.

However, one thing we know is that the government is feeling unprecedented pressure to change its policy. The pressure comes not just from international foodies and travel writers who have drawn attention to the crisis, but also from a growing coalition of Thai workers, political figures, and academics – and, most importantly, from a new, unified vendor voice that views the policy as a setback for Thai society. 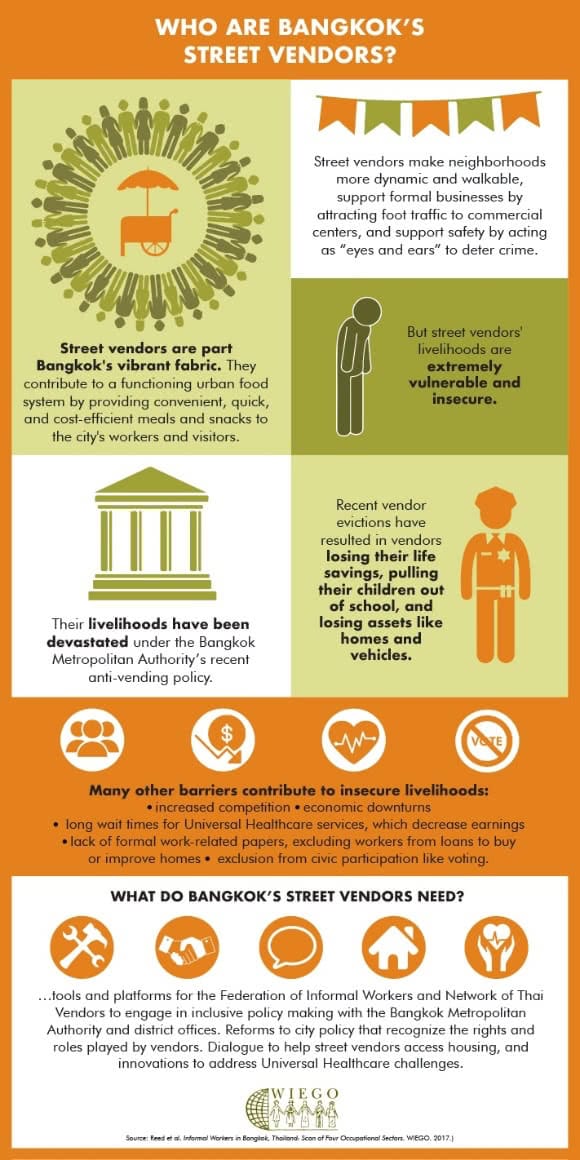 Bangkok’s vendors have been busily working behind the scenes to prepare to defend their place in the city.

Historically, these workers have not had a national or citywide association to represent their collective interests; however, many were well organized at the neighborhood level. Following a string of devastating evictions in 2016 and early 2017, group leaders from across the city began to meet each other while attending forums and filing grievances with city agencies. They soon started to coordinate informally via LINE messenger app.

In late 2017, the vendors made contact with HomeNet Thailand, the Federation of informal Workers of Thailand (FIT) and WIEGO. These organizations – and later the New York Street Vendor Project – affirmed for the vendor leaders that they were not alone, and that street vendors around the world have organized collectively as part of strong, member-based organizations.

In April 2018, Bangkok’s vendors officially established the Network of Thai Vendors for Sustainable Development. The network now represents 7,000 vendors in 23 districts of the city. It has committed to partnering with the BMA by mobilizing members and promoting compliance with regulations and norms that have existed for decades. The network seeks the right to return to previous locations in designated vending areas, and recognition of the rights of vendors to earn their livelihoods, to sell in historically profitable areas (“natural markets”), and to participate in decision-making related to management of public space and vending in Bangkok.

With HomeNet Thailand, the network developed an action plan to amplify these demands. Allies and academics supported the network to gather a substantial evidence base on the multiple roles that vendors play in Bangkok’s urban system. WIEGO’s research demonstrates the high costs to consumers of the BMA’s eviction policy. Importantly, the Urban Design and Development Center (UDDC) has shown the relative insignificance of vendors in obstructing pedestrian traffic (compared to other major obstructions throughout Bangkok), as well as how vendors, in fact, play a key role in creating walkable, livable public spaces.

These organizations – and later the New York Street Vendor Project – affirmed for the vendor leaders that they were not alone, and that street vendors around the world have organized collectively as part of strong, member-based organizations.

A number of prominent public voices have argued against the government’s current policy toward vending. The new Beyond Food network has stepped in, as well. And following the vendors’ march on the government house, an open letter signed by 115 Thai and international academics voiced support for a new approach to vending management.

Legal experts have also taken notice. A new committee under the Thai Law Reform Commission is charged with proposing a national law on street vending. Currently, two pieces of national legislation give the BMA permission to regulate vending, but neither addresses vendors’ rights to livelihood or participation. The committee has been meeting regularly with leaders of the Network of Thai Vendors, politicians, the BMA, and civil society organizations.

This week, with overwhelming public support from diverse areas, vendors decided to put into action their plan to save their livelihoods – and Bangkok’s lively street culture. The vendors wrote their demands in an open letter to send to government officials.

This is not the first effort to gain the BMA’s attention. Network leaders have been supporting local vendors to negotiate with area authorities to remain in their spaces, and on 31st July, network members marched to city hall in solidarity with the Khao San Road Vendors Association to demand that the BMA reconsider new restrictions.

This week’s march, however, was hard to ignore with such a strong showing and the growing solidarity from leading voices. After meeting with the network leaders, the government’s representative agreed to set up a new committee, which will include representatives from street vendors, the BMA, and the Metropolitan Traffic Police, within 30 days. The network will follow-up after 15 days on the grievances that vendors filed to ask for custody of designated vending areas (both those already cancelled and those that are scheduled to be).

Why the BMA should take this seriously, and what it should do

The next 30 days will be important to watch. With the new network, the BMA has a major opportunity. It can now sit down with an active, credible partner in developing a strategy for the city’s vending landscape.

As outlined in the network’s open letter, the first step is for the BMA to come to the table to negotiate the terms under which vendors can return to their previous vending areas in the short-term. Vendor leaders have made it clear that they are willing to compromise on new rules and restrictions, but ending the immediate crisis is urgent and critical.

An end to the crisis can also open the door for long-term, innovative solutions for vending management. Academics, urban designers, and legal experts have offered to help design new policies to make Bangkok a model of prosperous, sustainable street vending.

With these steps, Bangkok would be able to maintain its reputation and draw as a global street food mecca – and prove to be a showcase for the region on making street vendors a part of future cities.