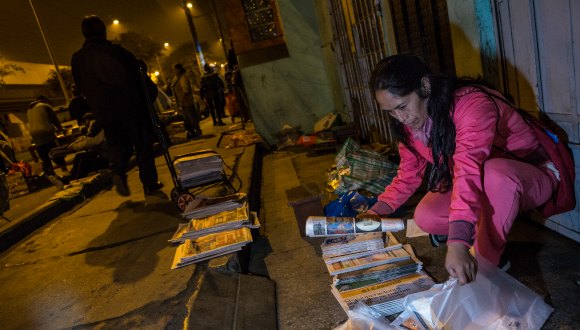 Madalena Duarte is a strong woman leader. She is also a waste picker in her hometown of Itaúna, Brazil – work she has been doing for many years to support her family. As a member of the National Waste Pickers Movement (or MNCR, its acronym in Portuguese) and the Red Latinoamericana de Recicladores (Red Lacre), Duarte has been fighting to increase women’s representation and raise women’s voices so their particular needs are heard more clearly.

“Several years ago the cooperative was led [entirely] by men. The president, the treasurer, they were all men. It took courage for many of us to challenge this set up,” she says. While having women’s voices represented has been an important step, Duarte emphasizes the need to have their voices respected as well. “You know, women are disrespected in so many ways even today. There’s violence against women everywhere. Women are disrespected on the streets, while they wait in line, at the workplace, in politics.”

In cities across the world, women informal workers face similar constraints as they work towards sustaining their livelihoods and well-being. Some of these challenges relate to the need for shifting gender-blind policies and urban planning models in order to make room for the democratic and safe use of public spaces for women’s economic and leisure activities. Also, the lack of access to basic services, land/housing security, decent work conditions and equal pay, along with increasing gender-based violence, produce different levels of vulnerability for women.

Against this backdrop and the Sustainable Development Goal 5 on gender equality, much debate has centred on understanding the ways cities and governments can be more gender responsive. As Habitat III approaches, experts on gender, convened by the Habitat III Secretariat and the Huairou Commission, have provided a comprehensive list of strategies and recommendations that promote a gender perspective on cities and settlements, as well as foster women’s economic, political and social empowerment. The attempt to engender the new urban agenda emphasizes participatory processes involving urban planning and budget discussions at all government levels, support for women’s organizing and capacity building, especially among marginalized communities, and increased government accountability and transparency through the development of indicators and the implementation of monitoring and evaluation mechanisms. The broader objective of encouraging gender responsiveness looks to ensure greater visibility and voice for women and other marginalized groups across rural and urban areas. In this sense, it recognizes multiple forms of discrimination not only on the basis of gender, but also on race, age, ethnicity, disabilities and other social statuses.

But what exactly does re-envisioning more inclusive, just and sustainable cities through gender equality mean for women informal workers, particularly in terms of the constraints they face? There’s no simple answer, but it often comes down to problems related to the public provision of services.

One of the most frequent concerns for women is having access to quality and affordable child care services. “We need to work and know that our kids are being well taken care of,” stresses Ivaneide Souza, a waste picker leader from Belo Horizonte, Brazil. She’s quick to point out that cities should also provide recreational centers for teens, too. Along these lines, Madalena Duarte says they need greater access to health care services. “Sometimes poor and working women just don’t take care of their health, there’s no time or information,” she says. “We just feel excluded from public services.” Having access to resources and information in order to expand women’s choices and enable them to make decisions that are meaningful to their lives and livelihoods is essential to the empowerment of women.

While there is a broad-based consensus for implementing policies that promote gender equality, the main challenge is establishing strategic and transformative paths that go beyond gender mainstreaming in local and national government discourses and actions. Rather, the focus should simultaneously involve strengthening women’s access to key assets and strengthening the possibilities for collective action.

At least two aspects of this process are worth mentioning. First, the knowledge key grassroots women can bring to the debate needs greater recognition. This is because knowledge based on specific histories or experiences is a critical point of entry for understanding and exposing injustices. “Since we live these problems daily, we’re more sensitive to them and we know we have to play a role in building a better world,” says Ivaneide Souza. Or, as Duarte claims, “Women work in a transparent manner, we want to talk with different groups and this is one way of gaining respect.” This may entail, for example, articulating the concerns of grassroots women to those of other more established and organized movements in the effort to build and sustain collective action. Influencing decision-making processes can eventually lead to “public policies that meet women’s concerns,” says Souza.

Ivaneide Souza discusses the implementation of a conveyor belt to help the sorting process with members of the Comarp Cooperative in Belo Horizonte, Brazil. Photo: A. C. Ogando

Secondly, there is a need to engage a network of government and non-government actors committed to gender equality. This reinforces the call for capacity building for government authorities on gender mainstreaming, as well as for women’s organizations. This is more likely, then, to establish deliberation processes where individuals and groups feel they have the capacities to share their needs and concerns. The goal of participation must be grounded in diversity and difference so that historically excluded and marginalized voices can be heard. It is essentially about seeing power relations in a more complex manner through a plurality of perspectives. Only by doing so can different groups of women ultimately be recognized as key players in the creation of gender-just and sustainable cities.