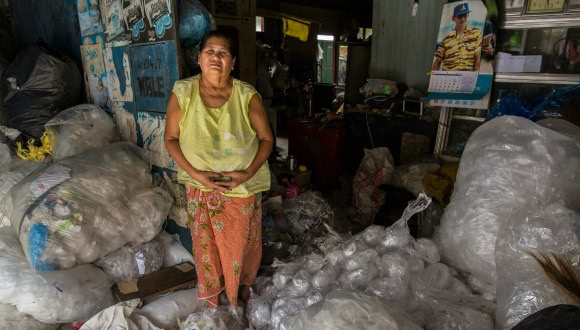 The poor face many challenges in accessing health services. However, argues Laura Alfers, WIEGO’s Deputy Director of Social Protection, the working poor, especially informal workers, “experience particular barriers to access based on the nature and place of their work, and may have occupational health needs as well as a need for general health services.” In recognition of World Day for Safety and Health at Work, we share the stories of five women informal workers in different cities who have experienced serious illnesses, near-fatal burns and even cancer to better understand the health-related services they have access to, what barriers they face in accessing these services and what would help to bring down these barriers.

Ushaben lives in Rajiv Nagar, India, and, along with her husband, runs a small shop in the front of their house. A mother of three grown children, her day begins at 5 a.m. and ends close to midnight nearly every day. In 2008, Ushaben developed a growth in her thyroid gland and endured repeated visits to three different hospitals and various private physicians before she finally had surgery in a private hospital. Both the time away from work and the costs of surgery and medicine have burdened the family for years. “The operation cost Rs. 20,000 (314.21 USD), and we had to borrow from relatives and friends to pay the amount to the hospital,” says Ushaben, who continues to deal with health issues to date. Read more about Ushaben’s story.

Koon Berkbandee, 41, a home-based garment worker, lives in Bangkok with her husband, a tile layer, plus her two sons, daughter-in-law and her grandchild. She and her family members were relocated in 2002 to the Chalong Krung Housing Estate, a state housing project that provides low-cost housing for the poor and slum-dwellers who have been evicted from inner-Bangkok to the fringes of the city. Two or three years after they had settled in, Koon discovered that her breast was red, swollen and had a lump. She was diagnosed with stage II cancer. During this time, Koon was not able to earn any money, but she still had to pay for transportation costs for several trips to the hospital. Read about Koon’s struggle with accessing a Universal Coverage (UC) card (Thailand’s state health care insurance scheme) and her ongoing cancer battle. Read more about Thailand’s Universal Health Coverage in our blog piece.

Xolisile Mhlongo sells cow’s head and meat dumplings at Warwick Junction in Durban, South Africa. She starts her day by 4:30 a.m. at the busy transport hub, where nearly a half-million people pass through daily. One morning in 2010, a fire at her stall engulfed her in flames, scorching her upper body and face. Nearby traders doused her in water, not knowing this would only make the situation worse. Today, Xolisile is back trading at Warwick, but she and her fellow traders have participated in an occupational health and safety training course run by a trader-led Phephanathi (Health & Safety) Council, which is supported and facilitated by Asiye eTafuleni (AeT), an NGO working with traders in the market to improve the urban environment in which they work. Read more about Xolisile’s story here and about the Phephanathi project.

Kanchana Changtsrong has been working as a domestic worker in Bangkok for 37 years, and with her English skills manages to earn 16,000 THB (530 USD) a month. She is not entitled to any medical benefits, however, as her contract stipulates that her employer is only responsible for her salary. Kanchana alone is responsible for her own expenses in case of illnesses. During the past three years, Kanchana has suffered several health problems. She is not confident in the quality of the health care under the UC; she fears that at best she will only be prescribed with some Paracetamol tablets. She says, “There are many patients using the UC. The service is overcrowded, takes a long waiting time. I do not have that much time for a long wait.” She pays for all her treatments from her own pocket and sometimes she has paid up to 5,000 THB (167 USD) for medications. Read more about Kanchana’s experience with Thailand’s UC and her struggles with continuing her work while needing several necessary, regular treatments.

Subhadraben is a home-based worker and member of the Self Employed Women’s Association (SEWA) in Ahmedabad, India. To help support her family, she rolls beedis (Indian cigarettes) from her one-room, windowless house in one of the city’s slums, earning approximately Rs. 50 (0.79 USD) a day making 500 to 600 beedis. Until 14 years ago, Subhadraben’s health had been good. Following the birth of her second child, however, she would feel breathless and had no energy even to walk. The doctor in the government hospital told her that she had a serious problem and prescribed medicine that she would have to take daily. A day’s worth of medicine cost Rs.13.50 (0.21 USD)—more than a quarter of her earnings—which she could not afford. In January 2014, just after cooking one day, she suddenly felt breathless. She could not see anything, became dizzy and was unable to walk. Her family took her to Shardaben General Hospital, treated her and kept her in the hospital for four days. Fortunately, the cost of her stay, Rs. 700 (11.01 USD), was reimbursed through SEWA’s insurance scheme, of which she is a member. Read more about Subhadraben’s experience accessing appropriate care and with SEWA’s insurance coverage.

The experiences of Ushaben, Koon, Xolisile, Kanchana and Subhadraben illustrate that health is an important issue for workers but particularly for informal workers as both a work-related contingency as well as due to the specific and unusual nature of informal work.

To learn more about occupational health and safety for informal workers, visit our site or watch a 20-minute video by WIEGO and partners, Asiye eTafuleni (AeT) in South Africa; HomeNet Thailand; and the Self-Employed Women's Association in India that tells the stories of informal workers and the difficulties they face in accessing health services in their respective countries. It also presents some of the solutions that each of these organizations has developed to mitigate against these barriers to access.