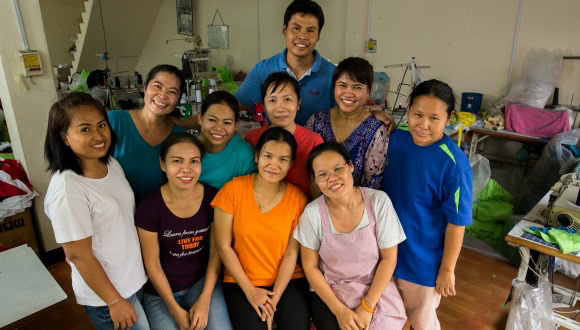 Manop Kaewpaka, 35, never expected to be a garment worker. At 18, he left his remote village in the northeast of Thailand and headed to Bangkok to continue his studies. When he arrived, he was shocked by the costs in the city and quickly had to drop the idea. Economic necessity took hold, and he followed what other rural-to-urban migrants were doing at the time: he joined one of many garment and textile factories operating in the country. The horrible conditions – long hours, low wages and an authoritarian environment – are happily in Kaewpaka’s past. Today, he and 14 other workers from that factory have established their own worker-managed cooperative garment factory, Dignity Returns, and successfully run a “horizontal” model based on their own principles of decent labour.

The group came together 15 years ago after the garment factory they worked in shut unexpectedly. Despite the conditions, Kaewpaka says that no part of him was happy to see it shut. Once again, economic necessity was driving his life’s decisions. He and the 700 workers at the factory demanded they receive the week’s pay that the company had failed to give them before closing, as well as compensation for being laid off. For three months, the group protested outside the Ministry of Labour, setting up sewing machines on the steps and gaining widespread media attention. The three-month struggle brought the small group of workers who remained closer together and eventually led to the founding of Dignity Returns.

“The protests stopped, but, at the end, we had profound friendship and solidarity,” says Kaewpaka.

With that solidarity, the stitchers, now all part of the country’s vast informal economy, decided they had the skills and know-how among them to launch their own business. Getting organized was a key first step – one that HomeNet Thailand has helped them with along the way.

Poonsap Tulaphan, head of HomeNet Thailand – a network that supports informal home-based workers – says that home-based workers, in particular, are difficult to get to organize because they are scattered and isolated in their homes.

“It’s different than with street vendors,” says Tulaphan. “They are meeting people all the time, so it’s easier when we approach them. With home-based workers, we need more time to work with them.” Many come together, she says, after a factory closes doors and the workers are left to fend for themselves.

In the case of Dignity Returns, the tight-knit group formed a set of principles to guide the development of their workplace. “We want to be unchained from capitalism,” says Kaewpaka. “When we said that to officials, they said it was impossible, but we’re doing it.” 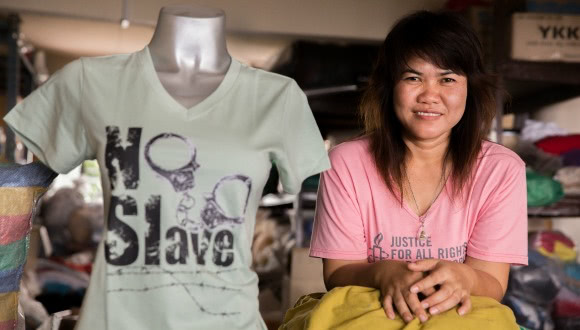 Phakhapon Khamkrachal is a member of the Solidarity Group, many of whom live and work together in their worker-run factory. Photo by Paula Bronstein/Getty Images Reportage.

The group rented a four-storey building in a small-factory zone on the outskirts of Bangkok. The floors are divided according to tasks: the first floor is for ironing; the second is for cutting; the third is for stitching; and the fourth is for living. Nearly all of the workers at the factory – they call themselves the Solidarity Group – live at their workplace.

Dignity Returns is a sub-contractor for suppliers who are looking for quality and, at least for one, the ethical treatment of workers. The cost of their clothing, primarily shirts and t-shirts, is four to five times higher than other factories in the area, but with that, the workers at the Dignity Returns factory all make minimum wage, work just eight hours in a day and have decent working conditions.

“We did this because we wanted to find what is best – what is most appropriate with our own hands,” says Kaewpaka. “We decided to work for ourselves and search for something that deserves us.” 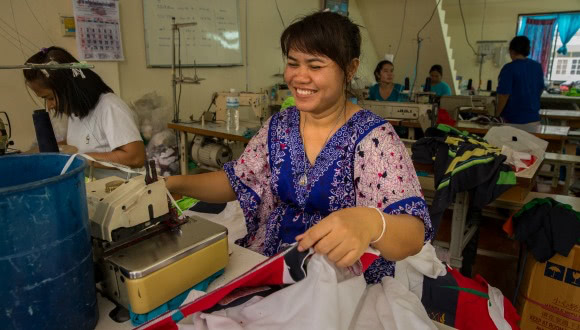 Garments produced by the 15-member cooperative are more expensive than the surrounding factories, but all the workers receive minimum wage and have a work environment based on decency and respect. Photo by Paula Bronstein/Getty Images Reportage.

As members of HomeNet’s Garment and Leather Workers Cooperative, the Solidarity Group has received training in a variety of skills they need to run their business successfully. Kaewpaka leads marketing, has created a website and is putting to use his training from HomeNet as a paralegal, particularly for other informal workers in the area of their factory.

In fact, that is a key principle of the Solidarity Group: to pay it forward. They spend their Saturdays teaching Thai to the many Burmese informal workers in the hundreds of small factories that surround them. They want to show others that it’s possible to work in different conditions so they don’t have to endure the same hardships the Solidarity Group did.

“We’ve attained a decent life. It doesn’t stop with just our group. We have to share what we’ve learned with others.”

Read more about home-based workers and the Solidarity Group in our Informal Economy Monitoring Study Sector Report on Home-based Workers.

Top photo: Manop Kaewpaka and other members of the Solidarity Group, former factory workers who founded their own cooperative based on the principles of decent work. Photo by Paula Bronstein/Getty Images Reportage.

This post was part of a project made possible with support from the Hewlett Foundation.