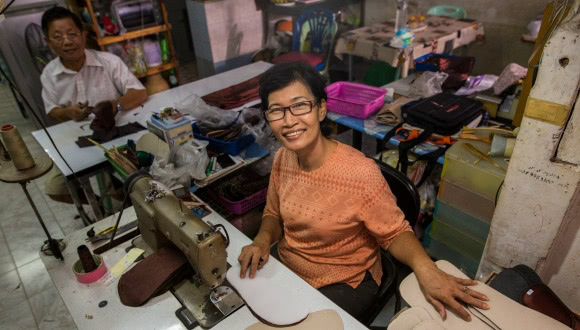 Remembering a Postcard from Geneva and Reaffirming a Campaign

In June 1995, Dr. Marty Chen, now WIEGO’s International Coordinator, went to Geneva, Switzerland, to show solidarity with the Self-Employed Women’s Association (SEWA) and the home-based worker organizations that were campaigning for a Convention for home-based workers. Ela Bhatt, founder of SEWA, sought her help, saying that the campaign needed statistics on home-based workers to highlight the significance of their work and to convince the employer groups who were blocking the Convention. Over the next several months, Marty and colleagues pulled together all of the statistics they could find on home-based workers around the world and published a landmark report.

On 20 June 1996, exactly 20 years ago today, the ILO adopted the Home Work Convention (No. 177) to protect the rights of home workers. The Convention was, at that time, historic and a huge victory for the home workers’ and informal sector workers’ movements the world over. It gave visibility to homeworkers, recognized their valuable economic contributions, and established their status as “workers”. C177 was the first time in the history of the ILO that a group composed mainly of women workers in the informal economy was covered by an ILO Convention. When the Convention was passed, Ela Bhatt and Renana Jhabvala, also of SEWA, sent Marty a postcard from Geneva that read: “The employers had their ideology. The workers had their statistics. The Convention was passed!”

In addition to greater recognition, C177 also calls for social protection and for fair remuneration, among other labour rights, for homeworkers. Homeworkers’ earnings are, on average, quite low and also erratic due to seasonal rhythms, value chain dynamics, and wider economic trends. Homeworkers also incur the non-wage costs of production, including the workplace, equipment and energy – all of which eat into their income.

Homeworkers manufacture a host of products, such as garments and textiles (especially embellishments and finishing of factory-made garments), leather goods (such as bags and wallets),  and toys and sporting goods (e.g. footballs, rackets, nets), and are engaged in many branches of industry, old and new, representing a significant share of employment in global supply chains. 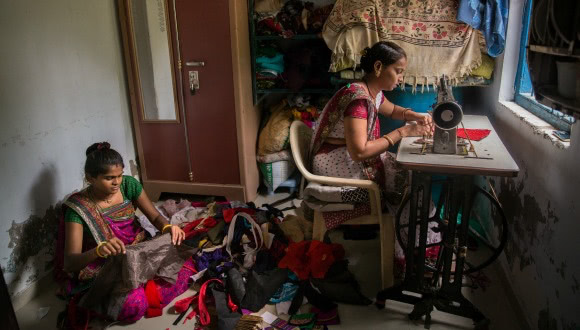 Working from within the confines of their homes, homeworkers, often in long supply chains, remain marginalized and isolated, despite the Convention. They have limited knowledge of markets and market prices and are less likely than other groups of informal workers to be organized. They are unable to bargain for more favorable prices and piece rates or to negotiate with government for better policies. Convention 177 on Home Work is the first international legal instrument to recognize them as wage workers on par with other workers.

A higher share of women than men work as homeworkers, often juggling work and family responsibilities, particularly in countries where there is no access to child care. Additionally, in some countries, women’s mobility is restricted for cultural and social reasons, and homework is therefore the only employment option available to them.

In the 20 years since the passing of the Convention, much has been achieved and yet much more still needs to be done. Home-based workers now have better statistical visibility and stronger organizations in many parts of the world. Networks of home-based workers at regional levels have developed and are in the process of strengthening. Brazil, Peru and South Africa have incorporated homeworkers into legislation regulating labour relations. Homeworkers have also been included through supply chain legislation. (South Australia’s Fair Work Act, which regulates the entire supply chain in the textile, footwear, and clothing industries, was amended in 2012 to include homeworkers.) The historic global Delhi Declaration of 2015, which urges policymakers to see home-based workers, count them, and bring them into the debate, is an important step in the direction of recognizing of home-based workers and their work.

In June 2016, homeworkers took a further step towards their recognition as workers.  A delegation of homeworker representatives from Pakistan, Nepal, Thailand, Indonesia, India, Chile and Kenya, together with WIEGO, participated in the ILC general discussion on ‘Decent Work in Global Supply Chains’. They were able to make sure that homeworkers were recognized as being part of global supply chains and that this was inserted into the official Conclusions. The Conclusions also acknowledged C177 as one of the instruments on which the ILO should base its programme of action to address decent work in global supply chains. In addition to the official discussion, the Workers’ Group of the ILO organized a special event to commemorate 20 years of the ILO Convention on Homework. There is renewed interest in the Convention, particularly as homework is increasingly a feature of the “digital economy”, and participants emphasised the need for a “new narrative”.

Despite the progress, ratification of the Convention has remained weak. Only 10 countries have ratified the Convention. And homeworkers in many parts of the world still remain isolated, invisible and poor, with little voice and even less protection. On the 20th anniversary of C177, there is a need to reaffirm the rights of homeworkers and to reignite the campaign – this time for ratification of C177.

Read more about the 20th anniversary of C177 and efforts toward global ratification.

Read the platform of  demands from homeworkers at the ILC.

Promoting the ILO Home Work Convention (C177) and the Rights of Homeworkers: A Manual for Workers’ Educators and Facilitators – This 2012 manual is designed to provoke and encourage discussion about homeworkers and their rights as workers, raise awareness about C177 – the ILO Home Work Convention – and its significance, and encourage homeworkers and their supporters to push their national governments to ratify the Convention and make it the law in their own country.

ILO Convention 177 on Home Work and Why It Should Be Ratified – A concise overview of C177 and how it benefits governments, homeworkers and employers.

Occupational Group: Home-Based Workers – This web resource gives information on the size, contributions, challenges and organizations of this sector.

IEMS Report on Home-based Workers – This WIEGO-led in depth research project used surveys and focus groups to learn how home-based workers live and work, what their issues are and what they need. Fieldwork was done in three cities: Ahmedabad, India; Bangkok, Thailand; and Lahore, Pakistan.