Six-Segment Model by Status of Employment

In the International Classification of Status of Employment, five statuses of employment – employer, employee, own account worker, unpaid contributing family worker, and member of producer cooperative – are defined by a) the type/degree of economic risk (of losing job and/or earnings) and of authority (over establishment and other workers).

WIEGO made the case that two additional statuses of employment need to be added to the official classification: namely, casual day labourer and industrial outworker. This is because day labourers face greater economic risk than “employees” (as they face the risk of losing job and/or earnings on a daily or seasonal basis), while industrial outworkers do not exercise the same authority over their work as own account workers (as they depend on employers/contractors for work orders, product specification, raw materials, and product sales).

WIEGO tested its segmented model in six developing countries: Costa Rica, Egypt, El Salvador, Ghana, India, and South Africa. National data in each of those countries was analyzed. When segmenting by sex, average earnings, and poverty risk, it found a similar percentage of workers in different segments who  are from a poor household across the six countries  (Chen et al. 2005). 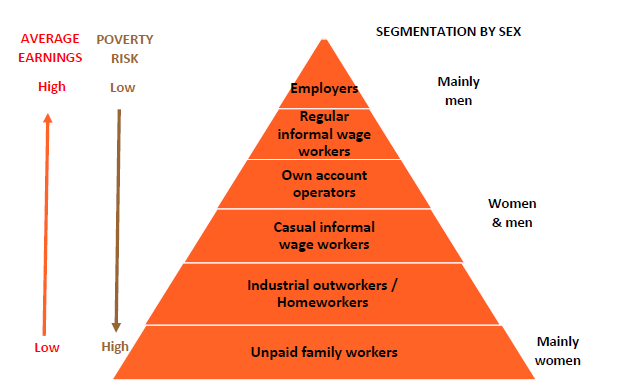 The premise of the WIEGO model is that the causal theories of all four dominant schools of thought are valid – but only for certain segments of informal employment. In its “4 Es” model, WIEGO characterizes these causal theories as Exclusion, Entry (Barriers), Exploitation, and Exit, as follows:

Based on its research and experience, WIEGO posits that the primary driving causes of each segment of informal employment (by employment status) are as follows:

Why an Enforceable Protocol on Social Protection is Essential in Africa
By
Pamhidzai H. Bamu, Laura Alfers
Visit the WIEGO Blog