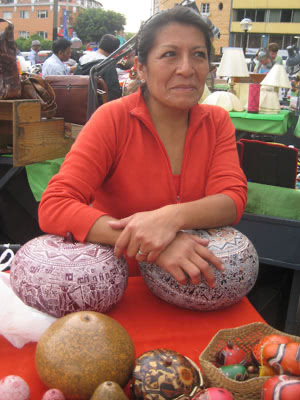 It builds on recent achievements in Peru, where WIEGO has invested in a “Focal City” approach in the capital, Lima. Former projects led to ongoing dialogue with government, and helped build unity between workers and their organizations from different sectors (waste pickers, domestic workers, newspaper vendors, shoe-shiners, and market porters).

Informal workers’ organizations have reached a level of maturity and have come to understand the benefits of speaking in one common voice.

The Situation in Peru

Peru is experiencing economic growth, yet conditions for a large majority of the working population have not improved. There remains significant inequality. Informal employment is high at 75 per cent of the workforce (National Household Survey data 2011). Those in informal employment lack social protection, including access to health care, pensions, and child care.

While citizens living in poverty are most definitely working, there is evidence that those who design social policy lack an understanding of the specific needs of the working poor.

Peru now has a national government (elected in 2011) focused on social inclusion, and this offers opportunities. A Ministry for Development and Social Inclusion was created to aid in fulfilling electoral promises: an improved child care program, a non-contributory pension allowance to those over 65 years old, and real universal health access. These were demands of informal workers, discussed with the (then campaigning) President at WIEGO-initiated events. Organized informal workers also had the chance to participate in electoral debates in Lima and have been able to continue dialogue with the elected Mayor.

Voice and Leadership also builds on WIEGO’s learnings in the sub-national regions of Peru, where conditions of work are more precarious and over-representation of women in informal employment and as heads-of-households is larger. Smaller-scale activity has shown a dramatic need to support informal worker organizations and women’s leadership in these regions. Also, authorities in these regions have less understanding of the needs of informal workers and there are no channels of dialogue. It is essential to build this understanding as decentralization of government moves functions and resources to sub-national regions.

This project is analyzing government social policies/programmes at national/local levels and how they  impact on the lives of the informally employed. Dialogue has already been established with the relevant Ministries (e.g. Labour and Health). Bilateral meetings are taking place to foster understanding and design pilot programmes suited to workers’ needs.

Lessons learned will be documented through micro schemes run by informal worker organizations to provide child care, health coverage, housing, funeral benefits and other benefits to their affiliates. These lessons can feed the plans of other workers organizations and the larger social policymaking. Finally, it will endeavour to build long-lasting links between "macro" policymakers and "micro" informal workers.

In the still new sub-national regions, informal workers’ organizations will gain the ability to present their demands to authorities in an articulate way, with a proper strategy to sustain dialogue. Informal workers will gain representation on the relevant decision-making bodies for social policy.

Leaders of informal workers’ organizations, especially women, will be trained to monitor decisions that affect them, and to conduct advocacy on behalf of their members, partnering with academics and journalists.

Read about the project (in Spanish/en español).

Objective of this Project Element

Cities of Activity in Peru

Lima and three cities in the sub-national regions of Peru: Arequipa, Chiclayo and Tarapoto

Workers have come together in a Platform of Informal Workers, a collective that includes street and market vendors, waste pickers, domestic workers, newspaper vendors, shoe-shiners, and market porters.