Success for the Women of Machakos Cooperative Union

For a group of women who weave baskets in Machakos, Kenya, coming together to work—and coming to perceive their basket weaving as a business—has created a shift in perspective that has led to a better standard of living.

Unity and harmony are soft, immeasurable outcomes, but for a group of women in Machakos, Kenya, these have translated into solid earnings and improved well-being. 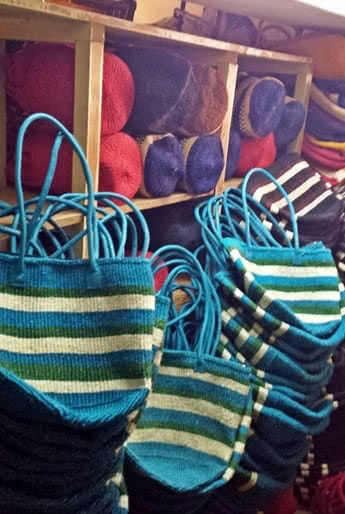 In December 2015, five women from rural Kenya dressed up and travelled an hour by taxi to the town of Machakos to meet with WIEGO representatives. They told us how working with KEFAT in the WIEGO-led Leadership & Business Skills for Informal Women Workers in Fair Trade project has changed their lives.

The women are part of a burgeoning 40-member group affiliated with the Machakos Cooperative Union. They produce sisal bags woven in different styles and sold through Machakos to an international market—for example, in Japan, Canada, Italy and Germany.

Machakos in southeast Kenya was registered in 1972 as a coffee cooperative. In 2015, it milled about half of all the coffee grown in this region. Most of its 34 primary societies are certified through the Fairtrade Labelling Organization. In 1980, Machakos started a handicrafts
division to provide women with livelihood options.  An affiliate of the Kenya Federation for Alternative Trade (KEFAT), the handicrafts division now has more than 26 women’s groups representing over 3,000 women.

Since 2013, women in some of the handicraft groups have undergone training on organizational governance, on their legal rights as women, and on financial and business practices that will strengthen their livelihood. These include how to appropriately price and cost their goods and how to negotiate a better price.

“The training has taught us to take this as a business. Before it was just leisure,” said Lydia John, the coordinator of the project in her group.

She added that learning better techniques and how to manage quality has dramatically improved the product—and the women’s earnings. “Before, you were weaving without knowing what you were doing. Now, you are counting your hours to make sure you are paid enough.” 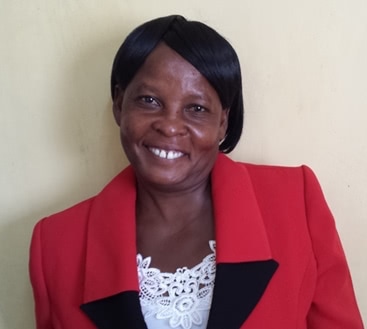 It is worth noting that the women who visited were well-groomed and dressed as modern business women—a stark contrast to the way they presented when we visited them two years earlier. They admit the way they dress has changed as their income has risen—and that this also enhances their confidence.

“Even if you are going to tend cattle, you have to be coordinated,” laughed Lydia, whose tailored red blazer matched her red and black shoes.

She also cited the importance of the social aspect, which is crucial to the group’s success. “We gather together and teach each other. Now we meet and can correct where we have gone wrong. Before, we went home to weave alone.”

Relationships within this tight-knit group have become more harmonious.  “We share stories. Now we are stress free,” Lydia said, explaining that the tendency to gossip or quarrel has diminished because the women come together with a common purpose. Being able to advise one another has helped women cope with difficulties. “We are at peace with each other.”

Two years ago, group membership was just 25, but as women in the community saw how their neighbours were thriving, and as orders increased, the group’s ranks began to swell. Recruiting often happens through training sessions, which are open to the whole community. Each new member must pay 500 Kenyan shillings to become a full-fledged member. However the payment is deducted in 50 shilling increments each time the woman is paid for a bag or basket. 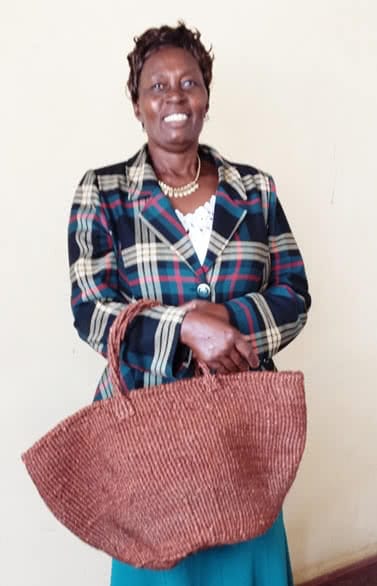 Training in product design and new development has also paid off. In addition to the original sisal baskets they still weave, the group has branched out to making new sizes and shapes, and using different materials such as banana fibers. One creative member of the team, Donata, has designed a basket that is rounder and wider. Part of the group’s commitment to environmental issues, the bag is designed for shopping and aimed at the global desire to reduce plastic bag usage.

Most sales are made through the cooperative union, which markets the products online and in catalogues. The project provided support with these marketing endeavours. Orders have become fairly steady, keeping the women busy most months of the year. (Women occasionally sell their own bags at markets, too, but report that they receive less money per item this way.)

When the satisfactory products are delivered to the Machakos office, the women are paid. Some money is deposited in the group’s joint account, and some is used to buy sisal and other raw materials.

The WIEGO-led project has also contributed to women’s leadership at Machakos. At the project’s outset, not a single woman sat on the 12-person Machakos Cooperative Board of Directors. In 2014, three women were elected to the Board.

The group also engages in savings strategies like table banking, which sees each put money in the pot regularly, creating a savings habit and a fund for loans (at a low interest rate) if someone needs more than they have saved.

Improved earnings have given the women access to formal credit. A financial services provider has come into the community directly because of the sisal bag success. It offers flexible, low-interest loans backed by a peer guarantee system. Some women have borrowed to buy solar panels. Because loan payments are due on the 12th of the month, the group holds its table banking sessions on the 10th of the month, and any woman struggling to make hert payment can borrow what she needs.

The influx of income has allowed members of the group to buy water tanks, to get gas cylinders and to buy livestock like goats and chickens. The goat’s milk can be sold providing another income stream.

“Our living standard is better,” says Lydia. “The money we get allows us to save and to borrow.”

With the encouragement of the WIEGO-led project, the group formally registered in 2013, paving the way for the women to access government funding from sources such as UWEZO, a local fund specific to women. Leaders in the group told us they are trying to get an appointment with officials so they can access the fund. If they are successful, they plan to use the money to build storage space and a showroom, with a covered open area that will allow them to keep a fire lit and heat water for dying the sisal even during the rainy season. 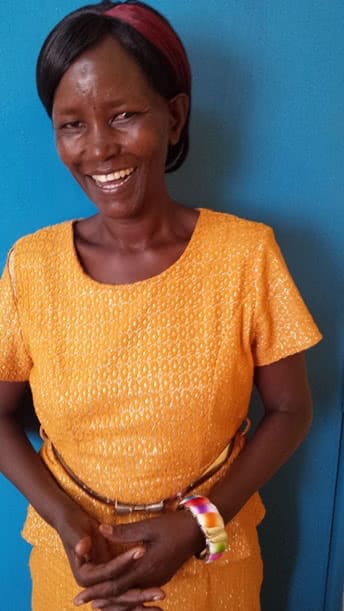 Learning that she had land rights changed Nora’s life.  A single mother of two who lives with her aunt, she had no access to land—or so she thought. But a training module on the new constitution, which grants women the same legal right to inherit land as men, opened her eyes.

Nora laid claim to a parcel of land that had belonged to her father. She has planted some food crops there, and with income from the baskets she makes as part of a women’s group under the Machakos Cooperative Union, she bought a goat that now grazes on her land.

Nora says the money from the sale of baskets at first helped her buy basic necessities “like sugar and soap”. Now, it isn’t just necessities she can afford. She has also invested some of the money—and realized a terrific tenfold return. A chicken she purchased for 300 Ksh has given her 10 chicks, each of which she sold for 300Ksh.

Improved income and title to the land have also led to increased confidence. “As a woman, I have my rights,” she says, adding, “We have the freedom to speak in the community, to have a voice.”