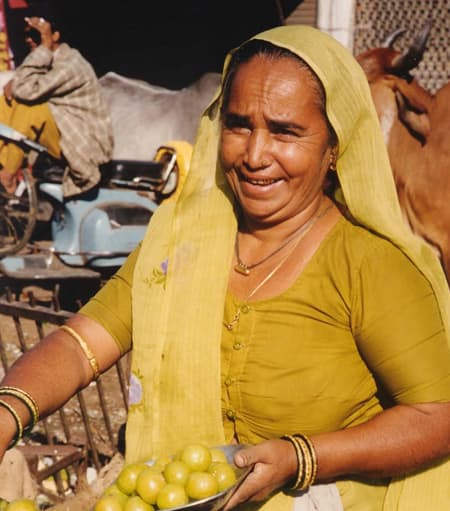 Working with the ILO and World Bank, WIEGO used value chain analysis as a medium to explore social protection—a world first, we believe. We commissioned comparative case studies on risks and access to social protection of workers in these global value chains (GVC): garment chains in Thailand and the Philippines; and horticulture chains in Chile and South Africa.

We developed a methodology that added three layers of analysis to the standard “mapping” of workers/units/value-added under GVC analysis:

Case studies formed the basis for dialogue between representatives of the ILO’s Social Security Division, the World Bank’s Social Protection Network, and the WIEGO network. The three organizations scrutinized their own social security/social protection approaches, identifying the extent to which they addressed the social protection needs of informal workers. Read Chains of Production, Ladders of Protection: Social Protection for Workers in the Informal Economy (Lund and Nicholson, eds., 2003).

This collaboration between WIEGO and UNRISD was built on the new space for broader social policy that opened prior to, and was reinforced by, the global financial crisis. It investigates the links between economic and social policies and spells out implications of this for social policy, using a gender lens and informal worker lens. A joint Social Policy Brief by James Heintz and Shahra Razavi (2012) argues that the connection between employment and social policies, weakened over the past three decades, must be reconnected in order to frame solutions to the economic crisis that are grounded in long-term, sustainable, employment-centred growth. Read Social Policy and Employment: Rebuilding the Connections.

To test our social protection framework, heighten visibility for the social protection needs of informal workers, and help build stronger networks of researchers and activists in this field, WIEGO organized regional research and policy dialogues with five countries in Latin America and eight in Asia.

A seminar on “Social Protection, Informality, and Gender” was hosted by the Center for Women’s Studies and the ILO-Latin America regional office in Chile in 2001, followed by dialogues in Argentina, Brazil, Costa Rica, Mexico and Peru. These dialogues bring together officials and policy influencers with organizations of informal workers. The purpose is to explore how best to include voices of informal workers in social policy development in the region.

A decade later, social policy dialogues and exposure dialogues are embedded in our “Voice” project in Peru and Mexico (2009-13), as well as our occupational health and safety work.

The dialogue was organized around core themes relating to social protection: child care; internal and cross-border migrants’ needs; and using global value chain analysis to identify exclusion from or access to social protection for informal workers in different sectors.

A series of popular brochures was developed on diverse social protection topics for informal workers. These have been compiled into a booklet: Tools for Advocacy: Social Protection for Informal Workers (Lund and Nicholson 2006).

The Social Protection Programme has been commissioned by several agencies to do specific research. In 2005 DFID commissioned a study on Occupational Health and Safety and the Poorest (Lund and Marriott 2011). Three case studies – of SEWA health insurance, the Durban health education programme for street vendors, and the ship-breaking industry in India – highlighted how formal OHS excludes informal workers entirely. Our analysis showed that issues must be tackled at local, national and international levels, and that informal workers need to form alliances with others, for example in the environmental movement.

More recently, we engaged with the OECD initiative on the informal labour market and poverty reduction. WIEGO provided the POVNET Task Team with a study on The Informal Economy, Social Protection, and Women’s Empowerment: Linkages and Good Practices for Poverty Reduction.

WIEGO’s Social Protection Programme has worked extensively with the ILO. This has included technical partnership collaboration (ILO-STEP, the World Bank and WIEGO), collaboration on a book on Reconceptualizing Work (SES – Socio Economic Security), collaboration in the Building Decent Societies initiative, commissioned research and involvement in policy advocacy work with the Social Security Division, and being a lead participant in a month-long virtual discussion on social protection (ILO-STEP), among other activities.

Subverting Master Planning to Advance Informal Worker Interests: Lessons from Delhi
By
Shalini Sinha, Avi Majithia, Jenna Harvey
Why an Enforceable Protocol on Social Protection is Essential in Africa
By
Pamhidzai H. Bamu, Laura Alfers
Waste Pickers Organize Into a Cooperative: Will Senegal Include Them in its Waste Management Plan?
By
Maguette Diop
The Pandemic is Not Over
By
Christy Braham
World Bank’s Push for Individual Savings Provides Little Protection for Crisis-hit Workers
By
Florian Juergens-Grant
Visit the WIEGO Blog