'Punished for their poverty': Street traders in South Africa 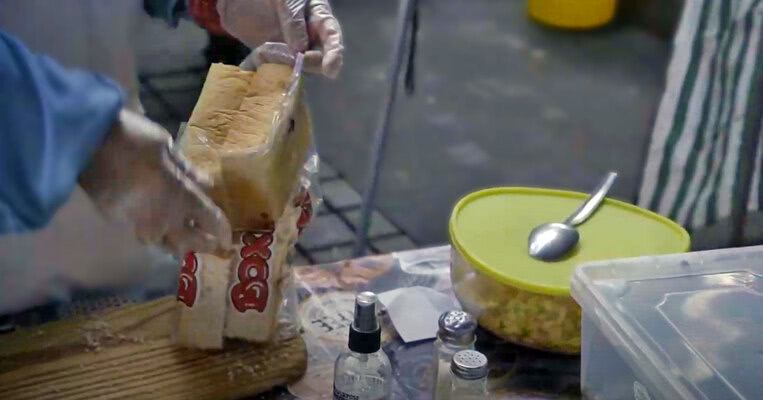 Because it often takes litigation to get city authorities to protect informal traders’ rights, the Socio-Economic Rights Institute of South Africa (SERI) represented a group of street traders under threat of an interdict that would have resulted in a total ban on trade in parts of central Johannesburg.

Traders in the affected area only became aware there was an interdict sought against them after a law enforcement officer told them that the City of Johannesburg was being taken to court for not ensuring that traders are complying with the regulations, said SERI candidate attorney Nerishka Singh.

In June, at the start of South Africa’s level 3 lockdown, a privately-owned company claimed that the presence of the traders would increase the spread of COVID-19, she said.

But the traders, who are members of the South African Informal Traders Forum (SAITF) and the African Traders Organization (ATO), understand the threat of the virus “along with everyone else” and are doing “all they can to mitigate the risk, and were doing so long before the case was brought,” she said.

Filed opposing papers on behalf of the traders included photographs to prove to the court that all health and safety regulations were being followed by the traders. They wear masks, use hand sanitizers and observe the social distancing protocols, Singh said.

All the traders in the area, which has been used for street trading since the early 1990s, have the necessary permits and are trading legally.

“Essentially, they are being punished for their poverty. And for trying to make a living,” Singh said.

Research has consistently found that informal food traders are key to the stability of the urban food system. Compared to the formal sector, the informal food sector is significantly more adept and better equipped to respond to the needs of the poorest urban residents. Informal food retailers, including street vendors, use innovative strategies such as offering credit, selling food in affordable quantities, par-cooking food and working long hours. This means that they play a central role in enabling food access – and as a result improve food security – for the urban poor. 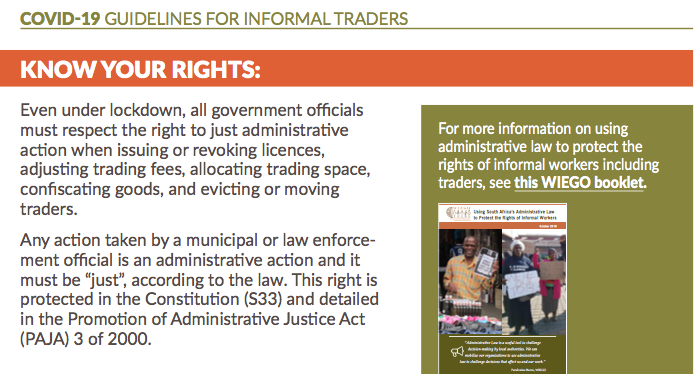 • With partners StreetNet International, Asiye eTafuleni (AeT), SERI and UCT's African Centre for Cities, WIEGO has published guidelines for informal traders in South Africa. The multi-language guidelines provide COVID-19 health, rights and financial support information to workers in markets, streets and spaza shops. They update earlier health guidelines and have been adapted for traders in Namibia. They will soon be available in versions suitable for local contexts in other countries and in more languages

The guidelines note that, even under lockdown, all government officials must respect the right to just administrative action when issuing or revoking licences, adjusting trading fees, allocating trading space, confiscating goods, and evicting or moving traders.

Any action taken by a municipal or law enforcement official is an administrative action and it must be “just”, according to the law. This right is protected in the Constitution (S33) and detailed in the Promotion of Administrative Justice Act (PAJA) 3 of 2000.

Available in poster and whatsappable formats, the guidelines provide information for traders interacting with government officials as well as policy advice for local governments.

In an article in The Conversation, WIEGO's Mike Rogan and Caroline Skinner argue that job losses show that support for women informal workers is urgent. In South Africa, recent data suggest that under strict lockdown in April, two-thirds of the 3 million people who lost their jobs were women.