SEWA Bharat – the All India Federation of Self-employed Women’s Associations – has published the results of a phone survey it conducted in April with 300 members in India. 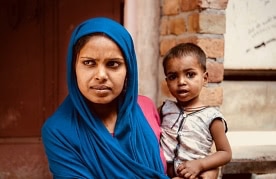 The resulting report, Gendered Precarity in the Lockdown: What The Lockdown Shows Us about the Precarity of Women Workers, details how the India-wide lockdown to prevent COVID-19 spread has impacted women’s incomes, savings, assets, education, food security, substance use, and health.

SEWA staff members, trained by the research team, spoke to 300 members interviewed live in many states and work in many occupations—including domestic work, street vending, home-based work and transport.

The findings reveal that women that women are experiencing more negative impacts on their incomes, savings, mental health, and access to healthcare.

The loss of income was causing severe hardship. Many said they were unable to afford fresh food or milk. While a small number had found ways to earn income—making masks, for example—or have another breadwinner in the house, others are in dire straits. Among the respondents, 78 per cent had run out of savings. Most who needed to were able to borrow from family, but some have had to sell assets and about 9 per cent had to borrow from moneylenders at high interest rates.

Weavers, artisans and home-based workers say the disruptions in the global supply chains—which began even before the COVID-19 crisis during political protests and riots—have left them without work. Markets have dried up; leaving some with unsold inventory and others unpaid for previous orders.

Sana Ben is a home-based worker in Delhi with two infants at home. Recently widowed, she has been eking out a meager existence doing piece rate work, to support her two children. The combination of the Delhi riots in February 2020…coupled with the lockdown has brought about severe food insecurity for her family. She and her children have had to go without meals on multiple days, and the children haven’t had milk in over two months at this point.

Domestic workers reported not having been paid in March or April; as lockdown guidelines are relaxed, most hope to return to work in May but fear the health risks posed by exposure to employers and the lack of sanitation and personal protective supplies.

Beedi rollers said isolation was a major problem, since they usually work in groups. A clampdown on the trade exacerbated their problems, as does the inability to get tendu leaves as the pickers themselves are isolated in their forest communities.

Agricultural workers were allowed to work, but reported significant difficulties in their trade due to lack of transportation; few of these women have their own means of transport.

Street vendors are concerned about how they can work after the lockdown and meet physical distancing requirements. Some faced harassment even before the lockdown as markets were cleared, so worry that their former markets and routes will no longer be available. They also worry that the stigma associated with their work will lead to a further drop in sales.

Vegetable sellers, who had been able to work, found it impossible to shout out and attract customers while wearing masks. To make sale, some are removing their masks off, thus increasing the risk to their health and the health of their communities.

Women across a wide range of occupations also said that the pressures of the lockdown, the need for earnings and balancing their health and that of their families is an ongoing struggle. Many mothers worry about the long-term impacts of food insecurity. Anxiety, increased domestic workloads and mental health issues were cited. And consistently, self-employed women expressed fears that their industries will not recover well.

Personal difficulties were also revealed. For example, because ambulances were only running for COVID-19, women experiencing other health concerns -- including pregnancy and childbirth -- faced significant difficulties. And women reported that although they had less paid work, their responsibilities for caring for home and family increased since everyone was at home.

Positive examples in some states

Across the 12 states in which respondents lived, there were significant differences in experience due to how governments responded. For example, “women from Odisha reported less hunger due to the government enabling food distribution” by collaborting with self-help groups. “Women interviewed in Rajasthan also spoke about how the state government had begun work with clusters of women to make masks earlier than other states, while in Uttarakhand, women mentioned how their government had responded to women workers who needed access to the market for their milk products” (page 2).

The Delhi government, too, was positively cited for partnering with civil society organisations, including SEWA Delhi.

Respondents were not financially compensated for their time, the report says, but the data was used to channel relief efforts by SEWA and their partners to the communities in need.

Sarabjit Kaur, a domestic worker in Punjab, identified vulnerable families in her mohalla and conveyed this information to SEWA staff and political leaders. These families were able to receive rations on a priority basis. She also identified women who could stitch masks, thus supporting livelihood opportunities for her community through the lockdown.

Read the full report of the findings.