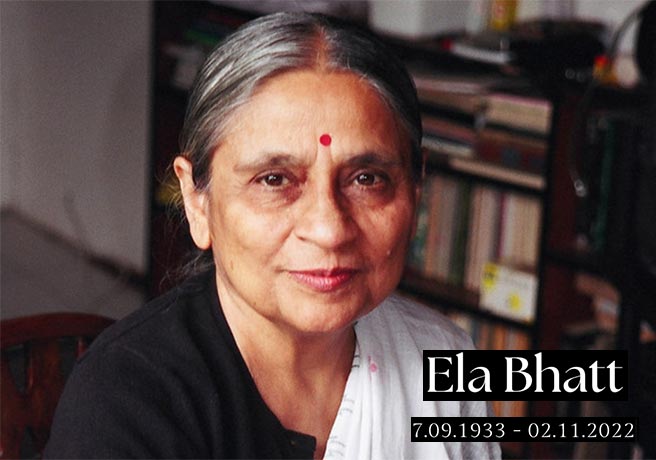 In an article titled "Ela Bhatt: A gentle revolutionary who changed millions of lives" for The Indian Express, Renana Jhabvala, Chair of SEWA Bharat and co-founder and former Board Chair of WIEGO, writes:

"She [Ela Ramesh Bhatt] has been called a gentle revolutionary. Both her ideas and her actions were revolutionary. She gave the world the path with which to reach out and change the lives of the poorest and she called it “Struggle and Development”. This path has been replicated not only in Gujarat where she began but all over India and even in many parts of the world.

As a revolutionary she realised that actions alone were not enough, the main problem, as she said, was “mindsets”. She needed to change the ideas and mindsets reflected in laws, policies and attitudes. She became an articulate spokesperson for these invisible women.

[...] Elaben recognised the importance of organising workers. What she started in Ahmedabad, she brought to the rest of the world, inspiring international federations of street vendors, home-based workers, domestic workers, and rag pickers. She made her presence felt in international forums such as the International Labour Organisation where she succeeded in getting a Convention for home-based workers. Recognising the need to change mindsets world wide she founded WIEGO an international network of researchers, policymakers and activists.

Perhaps Elaben’s greatest achievement is that she changed millions of lives. Empowering poor working women, but also many educated and professional women who joined her movement and took it forward. Last year, SEWA celebrated 50 years of achievement, but Elaben, at the age of 88 was still looking ahead: “Let us think of what change we want to bring in the next fifty years, who are the people we need and let us inspire many women as well as men to join us in that change."

This article was originally published on The Indian Express.