In Ghana, WIEGO’s fair trade project worked with Kuapa Kokoo, a co-operative of more than 80,000 cocoa farmers. During the project, Kuapa Kokoo delivered training to at least 2,800 women farmers in 670 of its primary societies.

As part of the Business and Leadership project, Kuapa Kokoo set a goal to increase women's membership to 30 per cent from 14 per cent. Progress was initially slow, but a woman was elected as president in 2013. Then in July 2014, women's empowerment surged. Women won 2,244 leadership positions up for election, representing 40.7 per cent of available leadership positions in the huge co-op.

Kuapa Kokoo planned to train at least 2,800 women cocoa farmers using the cascading training approach. In 2013, training needs were assessed and 670 women were selected as trainers. Chosen for their active engagement with Kuapa Kokoo and their communities, the women were given training on women workers' rights, business and leadership skills. They were encouraged to carry their new knowledge back to their regions and primary societies. Each was asked to train a minimum of six other women.

Most women have other streams of income beyond cocoa, such as vegetable gardens, petty trading, manufacturing of soap and plant oil extraction, and hair dressing. The project equipped women to better plan and manage their businesses and finances. The Impact Survey conducted in 2015 revealed that about 94 per cent of the women now plan before implementing a venture.

While the baseline survey found that 60 per cent of the women involved with Kuapa Kokoo owned land apart from land owned by their husbands, that number rose to 89 per cent by the end of the project in 2015. The greatest increase was due to women exercising their inheritance rights and getting land from their parents, while a smaller percentage acquired land from their spouses. In 2015, 17 per cent of the women who owned land had purchased it themselves, compared to just 3 per cent in 2013. The women indicated that empowerment training had been the single greatest contributor to
their decision to pursue land ownership.

The cascading training approach will allow those trained as facilitators to continue to train women in leadership and business skills; the new online manuals will help. Kuapa Kokoo wants to spread the benefits to primary societies that did not participate in this project.

The women surveyed at the end of the project indicated that they feel proud when women gain leadership positions and they think women can do better—that they can do what men can do. They pledged to train their daughters to become women of substance.

The Best of the Best Cocoa Farmers 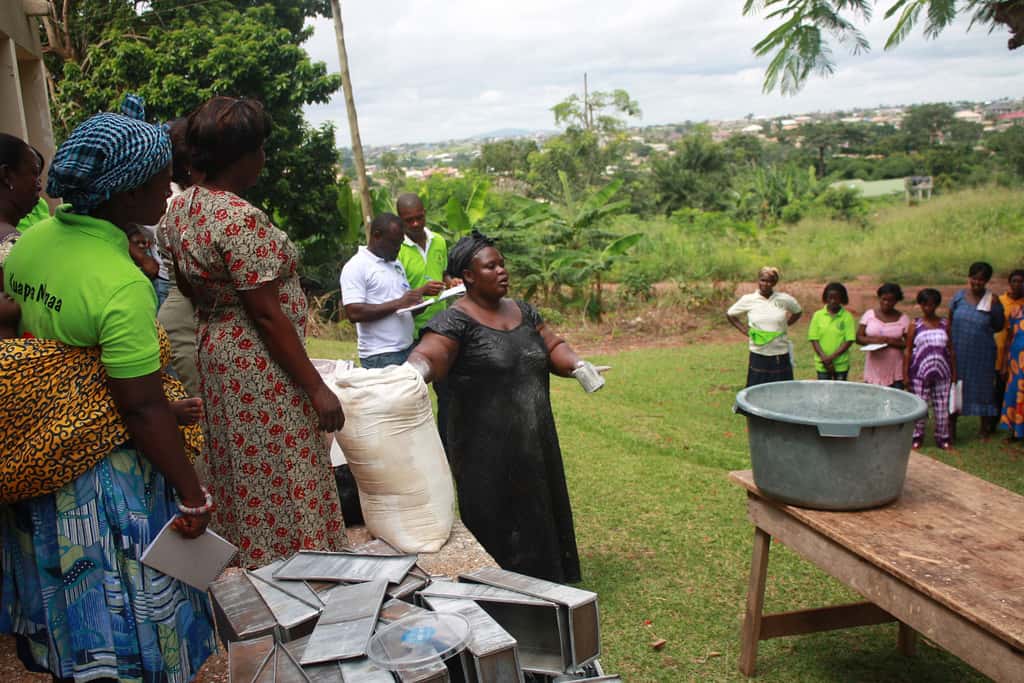 Kuapa Kokoo has a strong track record in promoting women’s leadership, and one of its main objectives is to enhance the participation of women in the decision-making process at all levels of operation and organization. Kuapa Kokoo strives to become the most globally recognized, leading, caring and efficient cooperative in cocoa production and marketing.

In May of 2013, Kuapa Kokoo held a project inception workshop  for Board members and staff to ensure that everyone was informed of the details of the WIEGO project and would have the opportunity to ask questions. The workshop was followed by a Women’s Forum for more than 250 women farmers. It was a joyful, noisy, exuberant event with much singing and dancing as well as serious training sessions on the characteristics and responsibilities of a good leader.

An explanation of the WIEGO project was greeted with much cheering and clapping. The three-year WIEGO project is a programme of capacity building to increase the participation of women as active cooperative members and leaders, increase women’s control over and access to assets, strengthen organizations and improve their ability to access markets and generate income and, by the end of 2015, develop a package of resources accessible to cooperatives all over Africa.

For more about Kuapa Kokoo and the vital role of women, read this article published by Divine Chocolate.