The hall was filled with official delegations, representatives and environmentalists, activists and organizers from more than 150 countries representing in the United Nations Environment Assembly (UNEA) 5.2 in Nairobi, Kenya. 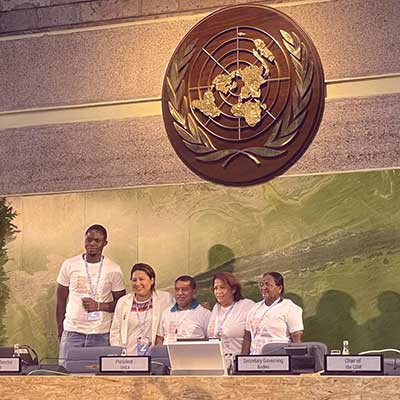 Soledad Mella, president of the Asociación Nacional de Recicladores de Chile and Global Alliance of Waste Pickers representative, and I were sitting at the back of the room. Anxious and alone. We were waiting for proceedings to begin. Soledad, as the representative of the waste pickers and labour constituency, was going to address the assembly.

Our walk to the podium was a long one, filled with excitement, anxiety and other emotions. It was the moment we had been planning for years.

When it was Soledad’s turn to speak, all eyes in the room were directed toward her, and all ears listened to her speech. While she spoke in Spanish, her words were translated, and she was heard in English, French, Arabic, Russian and Chinese. Soledad was given two minutes to speak. In those two minutes, she outlined waste pickers’ vision and apprehensions about the global plastics treaty negotiations. 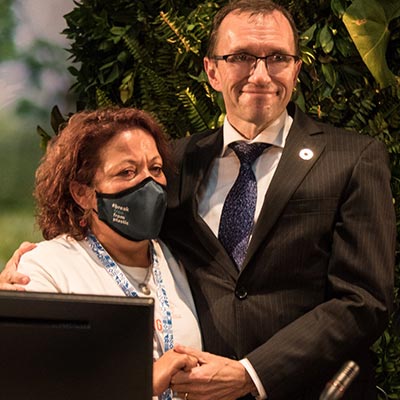 While her mic was muted after two and a half minutes, she continued talking in full flow and with beaming confidence. It was a crucial moment, both for waste pickers and for Soledad. After finishing her speech, she came down from the podium, her hands shaking and a satisfied look on her face. We did what we had come for and represented the hopes and aspirations of millions of waste pickers.

With that speech, we had put our hats in the ring. We declared that governments of the world cannot have any discussion on reducing plastic pollution without us. Our intervention in the assembly was lauded by the member states. The Chilean ambassador, Maria Alejandra Guerra, came outside to meet the whole delegation of the Global Alliance of Waste Pickers. And that was just the beginning. 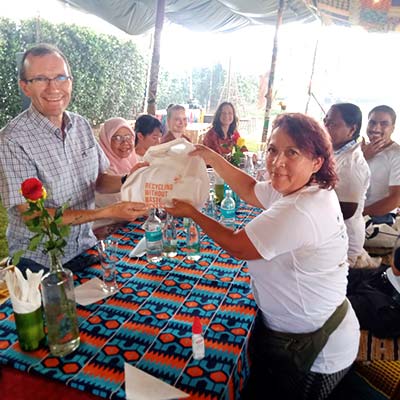 After Soledad’s speech, we parked ourselves outside the hall where UNEA was taking place. We were dressed in T‑shirts bearing the name of the Global Alliance of Waste Pickers, with the logos of waste picker organizations from all over the world. There we were – Sushila Sable from India, Silvio Ruiz Grisales from Colombia, John Xavier from Kenya, along with Soledad from Chile – with our T-shirts on and position papers in hand, ready to meet the representatives of member states. Our unique attire attracted the attention of the member states representatives. Delegates from Colombia, Brazil, Uruguay, India, and most people who came out of the hall bumped into us. We pursued them to become allies of waste pickers in the negotiations and to push for meaningful participation of waste pickers in the plastics treaty negotiations. Those four days were among the most intense of our lives. At the end, we managed to make history. Waste pickers were mentioned in the resolution of UNEA-5.2. For the first time, there was an environmental resolution that mentioned informal workers. We shed tears of joy and shared a sense of triumph. And it all began with the anxious walk toward the podium to address the assembly.