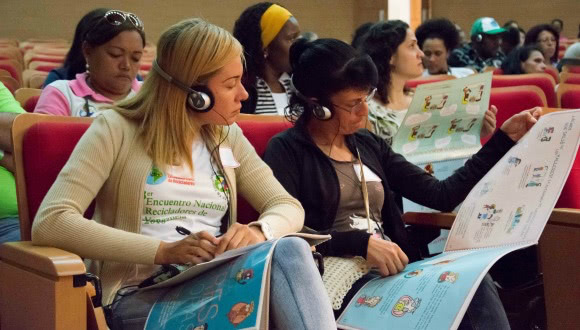 While academic studies increasingly focus on waste picking and solid waste management, including the threats and risks faced by informal recyclers, there is still a gap when it comes to understanding the gender dynamics and sexual division of labour involved in waste picking activities. The Gender & Waste Project, undertaken in 2012-2015, sought to fill this gap by working closely with women waste pickers in Minas Gerais, Brazil, in a horizontal and participatory process. The aim of the exploratory research-action project was to understand women’s concerns regarding gender inequality in their workplaces, homes, and within the national movement of waste pickers. In this sense, it focused on how women waste pickers both identify the gender hierarchies in their daily lives and find ways to challenge them, despite the obstacles that extend beyond gender identities. Ultimately, the objective was to begin mapping out the tools women waste pickers need in order to strengthen their roles as economic and political actors, culminating in two Gender and Waste Toolkits.

Coordinators discuss the relevance of the gender project for the movement. Photo: L. Mintz

As Marlise Matos, one of the coordinators of the project from the Federal University of Minas Gerais, notes:

“This project was designed with the purpose of intervening in workers’ lives in a creative and original manner. Based on complex democratic and sociopolitical processes, it seeks to collectively work on public issues and agendas of intervention that impact labour. We were interested in creating new frameworks for interpreting reality through a critical and feminist analysis that rethinks both the power relations among individuals and the possibilities for establishing alliances and shared strategies of action.”

Therefore, part of the framework was geared towards establishing new paths of dialogue among academics, researchers and practitioners. The two toolkits, which detail the design, implementation, and learnings of the approach to building gender awareness with women waste pickers have been created to be accessible and practical to two different audiences.

First, a popular toolkit in English, Spanish, and Portuguese was launched for waste pickers to use within their own cooperatives. This toolkit introduces key gender inequality issues that emerged from our regional workshops in Minas Gerais.

Second, the academic/practitioner toolkit was developed for a broader audience interested in understanding the connections between gender inequalities in the waste sector. The toolkit is divided into three separate online booklets that cover the following topics: conceptual issues related to gender and waste; activities that structured the workshops and participant reflections; and additional resources ranging from academic texts to descriptions of projects on gender and waste that have been conducted thus far. With regard to the latter, an extensive, though not exhaustive, review of academic literature, guides, and videos on gender and waste were included. The booklets allow readers to choose from a variety of topics and further investigate areas of interest.

Both practical guides are meant to be user-friendly and adaptable to different contexts, as well as other informal occupational sectors. In fact, during the Co-operatives and the World of Work Research Conference in Antalya, Turkey, in 2015, researchers emphasized how there are few practical publications in circulation on gender-awareness considering cooperative dynamics. The publications that do exist either lack accompanying documentation or they refer to equality in a general sense without delving deeper into activities that relate to gender equality in the specific context of cooperatives.

Given this space, the academic/practitioners toolkit on gender and waste can be a relevant format for sharing information and experiences on how to work with gender awareness that connects different groups interested in women’s empowerment. It is designed, therefore, to foster the creation of a network of academics, researchers, and practitioners from the Global South to North that are committed to practical work involving gender equality. On a broader level, it bridges the theoretical and the practical divide.

The practitioners toolkit also highlights the various tools used to explore issues such as women’s autonomy; stereotypical and traditional gender roles; and how gender, along with race, age, class, and sexual identity, influence the ways in which women waste pickers experience oppression. In this sense, the toolkit presents the participants’ reactions to the various activities, including the moments for recognizing each other’s strengths, as well as those where tensions emerged. Showcasing these voices brings visibility to the individual differences within the group. The toolkit emphasizes that building gender awareness can only be successful if it engages women participants from the onset so as to design tools and activities that reflect women’s concerns.

Activities from the workshops can be reproduced in other settings. Photo: A. C. Ogando

The underlying message of the practitioners toolkit is that there are various tools that can be used to begin discussions on gender awareness within the context of cooperatives. But it also highlights how collaborative and participatory approaches can produce more accessible materials capable of reaching broader audiences and bridging understandings on gender inequality. Ultimately, the goal is to strengthen solidarity not only among women, but between men and women as well.