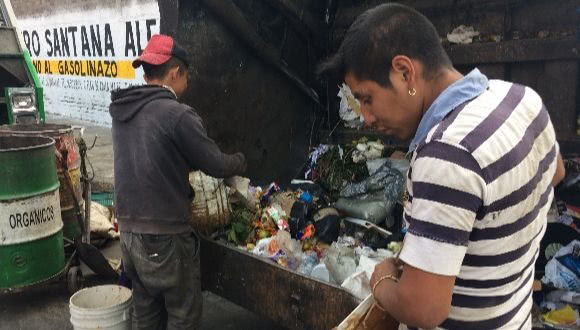 In Mexico City, a controversy is brewing over a proposed billion-dollar waster incinerator that threatens the livelihoods of the city’s estimated 10,000-plus volunteer waste pickers. On this International Waste Pickers’ Day, we speak with WIEGO’s Focal City Coordinator in Mexico City, Tania Espinosa, about the proposal and its potential impact on both informal waste pickers as well as the environment.

1) Mexico City signed a billion-dollar deal to build a waste incinerator. The claim is that heat and energy from the incinerator will help power the city – if the deal goes through. Yet there are many concerns with this project. Could you tell us about those concerns and who is voicing them?

TE: The government of Mexico City signed a contract with the transnational company Proactiva Medio Ambiente: Veolia to build and operate a major waste incinerator that will generate 965,000 megawatts per hour, which approximately is the amount of electricity the city’s 12 subway lines need to run. This controversial deal has triggered different concerns, including:

TE: As part of the contract for the incineration plant, the government has agreed to hand 4.500 tonnes of waste a day for the incinerator to operate, which essentially means that waste will be privatized.

Theoretically, these 4.500 tonnes should not include recyclable materials. In 2017, a policy was put in place in Mexico City to implement the separation, classification, selective collection, and waste storage. However, citizens continue to produce waste without separating it carefully, so that waste is still reaching the garbage trucks all mixed up.

Having mixed waste means that waste incineration may include materials that can be recycled, which jeopardizes informal waste pickers’ – volunteer waste workers, those who work on trucks, recyclers from selection and treatment plants, as well as waste pickers at the final destination – access to recyclable waste, threatening their livelihoods.

It is impossible to know the number of informal waste pickers that will be impacted, since there is no census, despite the Commission of Human Rights in Mexico City’s call for a census to be carried out. However, Sindicato Único de Trabajadores del Gobierno del Distrito Federal’s estimates there are 10,000 volunteer workers who collect waste from homes in the city. This estimated number does not include waste pickers who work at selection and treatment plants or workers at the final destination.

Waste that is burned in an incinerator cannot also be recycled, so the project fundamentally threatens waste picker livelihoods.

3) In discussions about the project, have waste pickers’ livelihoods and the potential impact been considered? If so, what plans are being made to ensure alternatives?

TE: The impact of the incinerator on recyclers’ livelihoods was not taken into account as part of the project, and there has been no debate on the subject.

It is important to mention that on September 4, 2017, the head of Mexico City’s government, Miguel Angel Mancera, said on his Twitter account that 10,000 volunteer waste workers would be hired as staff, without mentioning that this was related to the new incinerator.

On February 10th, 2018, at a public event called “Labour justice, Regularization 2018”, Mancera formally hired workers, giving them their first receipt of payment, along with their official inclusion in nómina 8, a programme of temporary contracts with benefits for unions. During the event, he recognized that there were people that had been working for over 30 years without compensations.

The opposition party, MORENA, asked the Electoral Institute of Mexico City to send an observer in order to ensure that the act was not proselytizing, since it was celebrated before the national and local elections that will take place in July 2018.

4) Are there mechanisms for waste picker organizations to be part of the decision-making process or to be included in discussions around the incinerator?

TE: Not at all. Waste pickers are not considered stakeholders that should be deciding about the incinerator.

5) What would you envision as a sustainably and socially responsible alternative to a waste incinerator in the city?

The separation of organic, recyclable and non-recyclable waste should happen at the source, where it is generated. This way it is easier for each material to reach its final destination and receive proper treatment without getting mixed up, which has positive effects on the environment.

Source segregation is also beneficial for waste pickers, as it can translate into better working conditions when they do not have to separate waste themselves. It will also increase their earnings, since materials would not be mixed with organic waste.

Of course as citizens, we should be responsible consumers, aiming to reduce waste consumption. As consumers, we should prioritize products that come in reusable and recycled materials, while avoiding disposable ones. Public policies should also aim to reduce waste generation, while encouraging reutilization, recycling, and the efficient use of waste. It is pointless to think of producing energy through waste generation and incineration. We could save energy through recycling, thus avoiding the use of natural resources and raw materials to create those products again.

Finally, a census on informal waste pickers must be carried out in Mexico City to determine how to give greater visibility to their work, while recognizing the positive impact they have on the environment and the economy. Only by considering waste pickers as allies, which they already are, can norm 024 can become a reality and Mexico City a sustainable and inclusive city for all.