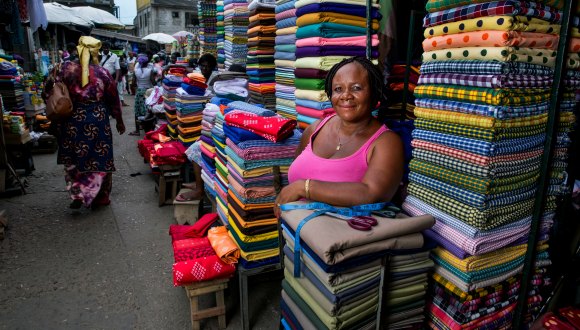 The New Urban Agenda, the next global commitment for sustainable urban development, holds immense potential as a transformative plan of action for our human settlements. The Women in Informal Employment: Globalizing and Organizing (WIEGO) Network has been a consistent voice in the Habitat III process, ensuring the participation of informal workers in the process and advocating for their economic contributions, priorities and needs to be recognized in this new global commitment.

In advance of the Intersessional Meeting for Stakeholders on the Zero Draft of the New Urban Agenda taking place June 6-10, WIEGO presents the following priorities and recommendations to pave the way for a fully inclusive, equitable and transformative global commitment. We provide our vision to further strengthen the New Urban Agenda’s commitment to securing livelihoods and to recognition of the linkages between the informal economy and critical aspects of the city, including access to housing and basic services.

We welcome the recognition of, and recommendations relating to, informal workers, the informal economy, the informal sector, and the urban poor included in the Zero Draft of the New Urban Agenda, and the recognition of the need for “a radical paradigm shift in the way cities and human settlements are planned, developed, governed and managed” in line with Policy Paper 1 on the Right to the City (preamble).

We also welcome the strong commitment to informal workers in the following paragraphs:

The Zero Draft’s references to economic growth, competitiveness, and investment must not undermine the argument that a radical change in paradigm is needed.

Although the draft argues forcefully for a new paradigm to guide urban policy, there is still an undertone of commitment to economic growth, competitiveness and investment in some paragraphs (e.g. par. 55 which frames health and education as necessary to “allow cities to compete in the global creative economy, adding value, increasing productivity and attracting investment and employment”). The draft also focuses on the city as an “enabling environment for investment and innovation” (par. 46) that is also “providing a predictable framework attractive for investments” (par. 53). References to “the private sector” and “private business” do not distinguish between the corporate private sector and the non-corporate private sector.

Cities are engines of growth but are also marked by extreme concentrations of contrasting wealth and poverty. As outlined in Policy Paper 7 on Urban Economic Development Strategies, “employment-led economic development” is the primary concern of many city governments and stakeholders, and urban economic development depends on a multi-pronged investment targeted toward employment growth via investments in housing; in infrastructure, public transport, and public services; in formal and informal businesses; and in human capital.

The disadvantaged integration of informal jobs into the wider urban, national, and global economies can yield a ‘subsistence economy’ that only allows inhabitants to survive, but not to progress sufficiently to change their living conditions, nor to realize their full potential contributions to urban productivity. Investment must not be targeted outward with the aim of global competitiveness between cities, but rather inward, toward maximizing local employment and the local economy.

References to grassroots stakeholders must capture the wide range of actors, including organizations of informal workers such as unions and associations.

Although the draft mentions informal workers, it does not explicitly mention informal workers’ representative organizations. There is one mention of trade unions (par. 65) and one mention of cooperatives in relation to housing (par. 110), but neither of these relate to informal work. The New Urban Agenda must recognize organized groups of informal workers as a grassroots stakeholder in the city planning process. Despite the draft’s multiple calls to engage “private sector, academic institutions, and community development partners” in meaningful participation in local economic development planning (e.g. par. 49), its failure to make explicit mention of workers’ organizations could result in their continued exclusion from policy settings.

Strengthen the linkage between informal livelihoods and informal housing by citing lack of access to decent work as a push factor for informal settlements and their growth.

Par. 31 recognizes urban informality to be the “result of lack of affordable housing, dysfunctional land markets and urban policies.” It continues: “We must redefine our relationships with informal settlements and slums, including the informal economy, in ways that leave no one behind, taking into account that those areas are also engines for economic growth, prosperity, and job creation.” We would add that Improving residents’ access to decent work is fundamental to improving access to adequate housing -- informal settlements are also a product of residents’ insufficient access to quality livelihoods that would afford access to adequate housing.

We propose the following amendments and additions:

Concrete plans for partnerships between national, state, and local government with non-government actors, especially grassroots, must be more clearly concretized within this outcome document. Informal workers are strong and mobilized agents of change, collectively working together in membership-based organizations that have much to contribute to city budgeting, planning, implementation, and monitoring processes. Recognition of these agents as stakeholders and their incorporation into modes of implementation are fundamental building blocks for engagement and collaboration in urban development processes. The roles and frameworks for government implementation at the national, sub-national, and metropolitan levels have been clearly defined (par. 86-91); however the diverse roles and frameworks for “stakeholders,” which would encompass grassroots, civil society, private sector, and other stakeholders, has not. Clarity is needed on the roles of these stakeholders in priority setting, implementation, and monitoring activities. In addition, the support to be provided to these stakeholders, including building their technical and financial capacities to execute their roles, is unclear.

We propose: Map out and solidify opportunities for formal partnership and collaborative governance between local government, national government and grassroots groups (such as unions and associations of informal workers), as well as technical and financial capacity building to ensure this standard is met during the implementation stage: