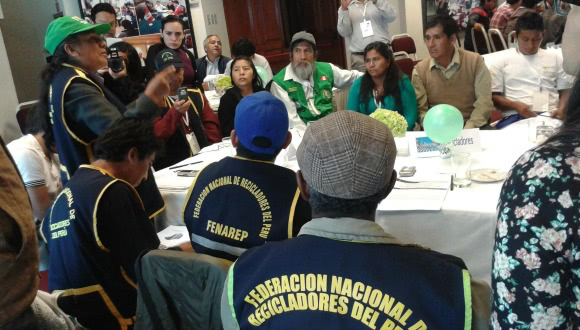 More than 140 informal worker leaders from Lima and other cities in Peru gathered in November to create a common platform of demands and proposals to put forward to the 2016 presidential candidates. The National Meeting of Informal Workers, a two-day meeting convened by WIEGO and the Friedrich Ebert Foundation (FES), was the first meeting of informal workers, for informal workers, at the national level. Informal workers participating in the meeting had the chance to hear from two party representatives ‒ Gastón Benza Pflucker from Partido Aprista Peruano and Pedro Olaechea from Peruanos Por el Kambio, both chief advisors for their parties’ government platforms ‒ about their parties’ position and views on employment, the right to work, and the necessary instruments to improve the situation of informal workers. But more importantly, informal workers were able to present their demands and proposals to them and engage them in a dialogue about the way forward with formalization.

Despite Peru’s recent economic growth and macroeconomic stability, 70 per cent are informally employed. Although invisible for most policymakers, informal workers are the heart of urban dynamics in Peruvian cities. Newspaper vendors, street and market vendors, market porters, shoe shiners, domestic workers, moto-taxi drivers, and waste pickers, all make valuable contributions to the city and its citizens by making available products and services at affordable prices and convenient locations, offering alternative transportation options where public transportation is not available, and recuperating recyclable materials and diverting them from landfills, among others.

At the November forum, representatives from informal worker organizations raised the following key issues to the attending political representatives:

Formalization has to go beyond the notion of paying taxes. They demanded to be recognized as workers, to have decent work and to be included in policymaking processes. Many of them work in public spaces. To do so, they pay fees, levies, and taxes; they pay for permits and licences. Yet they have no guarantees that they will be allowed to work.

A clear (favourable) legal framework must be accompanied by adequate enforcement mechanisms. Informal workers called for the passage of a bill for the self-employed, which has been under discussion for 10 years, and for the drafting of sector-specific legislation that responds to informal workers’ needs.

Greater social protection needs to be extended to informal workers. Informal workers labour under very hard, and often hazardous, conditions, but they lack access to childcare, have no social protection through their work, and, in most cases, are not protected by labour laws. Even when laws do exist, they are not enforced. Waste pickers, for example, were pioneers in obtaining legislation granting them recognition as workers, but the regulations derived from this law are still pending to this day. During the meeting, market porters raised similar concerns about unenforced laws relating to their sector: the occupational health and safety law, for one, states they should not carry loads heavier than 50 kilograms, but they still have to carry 100-plus kilogram sacks.

To reduce informal workers’ vulnerability, they need to have access to social protection (including health care and pensions) and improved occupational health and safety; they also need a place to leave their children while they work.

Any transition to formality has to include capacity-building and other types of support, including financial support, to develop the workers’ skills, allow for the workers to accumulate capital, and overcome informal workers’ restrictions in accessing the banking system.

A more detailed document containing the common and sector-specific proposals will be published on www.wiego.org shortly.

Engaging with different stakeholders, including decision-makers, and proposing policy alternatives can ‒ if sustained over time ‒ become building blocks to improved and more inclusive legislation and programmes, and hence more inclusive cities.

This participatory process was one of the lessons learned from a similar exercise in Lima. In 2009, informal worker representatives presented a platform of common and sector-specific demands and proposals to the mayoral candidates (one of whom became mayor and was in office from 2010-2014) up for election in a meeting convened by WIEGO, FES, Programa Sindical en la Economía Informal (POSIE), and Consorcio de Investigación Económica y Social (CIES). The dynamic of the event and the effective presentation of the proposals by informal workers opened an opportunity for engagement with the municipal government that was seized by market vendors and street vendors. The former succeeded in obtaining the commitment of the municipality to participate in frequent multi-stakeholder meetings, including several national and local government agencies, to discuss and address the issues facing them; and the latter found a window of opportunity when the municipality included street vendors’ organizations in a consultation process to update street vending regulations in Lima. The active participation of street vendors in this process led to the drafting and approval of a more favourable regulation on street vending (Ordinance 1787), which includes their recognition as workers, a two-year permit system to reduce vendors’ legal uncertainties regarding their permission to sell on the streets, savings programmes, and support for the transition to formalization. Although these spaces for dialogue are not often statutory and can disappear with changes in government, they are important for depoliticizing the issues, building trust between the stakeholders, and developing longer-term commitments towards more inclusive policies and programmes.

Now, to follow up with the dialogue with political parties, informal workers’ organizations will engage in further advocacy activities in the coming months as the presidential race begins and explore other mechanisms at their disposal to engage with government authorities, including the use of ILO’s Recommendation 204 concerning the transition from the informal to the formal economy.