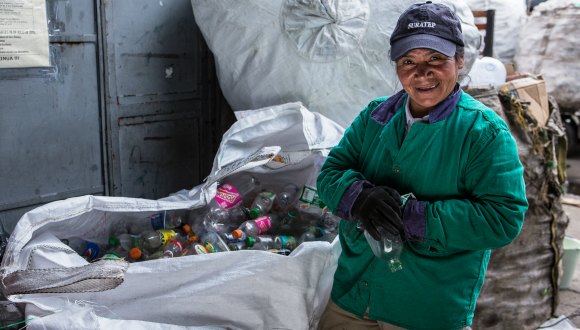 On International Waste Picker Day, WIEGO’s Sonia Dias tells us what works and the challenges ahead

In recent years, waste pickers have made significant progress in gaining greater recognition as key environmental and economic agents. Their work collecting recyclables from city streets and keeping public spaces clean – particularly in developing countries – comes at little cost to municipal budgets, yet accounts for a significant portion of solid waste management, recycling, and disposal. And today, waste pickers, many of whom are women, are no longer just a feature of the Global South. They are increasingly part of the urban fabric in developed countries such as France, Italy, the United States, and others.

As these workers achieve greater voice and visibility, policymakers are starting to acknowledge their contributions to the urban economy and to the environment, especially in countries where workers are more vocal through their membership-based organizations (MBOs). On this International Waste Picker Day, we’ll look at four key ways MBOs around the globe have improved and secured their livelihoods.

In many cities of the Global South, waste pickers´ organizations have been formed and have been fighting for integration into waste management schemes. By doing so, they complement the formal solid waste systems with a cooperative one based on recovery of recyclable materials.

For instance, in countries such as Brazil, Colombia, Argentina, and India, strong waste pickers’ cooperatives have provided jobs and, in many cases, a decent source of income for their members. For example, when the Pune, India-based waste pickers union KKPKP created the SWaCH coop, workers were able to provide waste collection services to the municipality, which secured the livelihoods of thousands of waste pickers in the city.

In Belo Horizonte, Brazil, the creation of waste pickers’ cooperatives in the 1990s helped establish a social accord whereby waste pickers were integrated as service providers into municipal source segregation schemes. Recently, the city has committed to expanding this long-term partnership with waste pickers cooperatives and has engaged informal recyclers not only as service providers in recyclables collection but also as community educators in its outreach campaign.

Given the constant harassment of waste pickers and the trend towards privatization to big companies, establishing a legal basis for the right to work is an important strategy in securing these livelihoods.

In Bogota, Colombia, informal recyclers have successfully adopted legal strategies to defend their right to work. They struggled for commercial rights while arguing for the maintenance of livelihoods as human rights. They also have succeeded in getting the Constitutional Court (April 2009) to rule in favour of waste pickers by granting them customary rights to access, sort, and recycle reclaimable materials. While they have encountered many obstacles in implementing legal victories, the existence of a strong organization has so far secured a groundbreaking victory for a payment for service by the municipality. Under this scheme, waste pickers are paid 87,000 Colombian pesos per ton of recyclables recuperated and registered at authorized weighing centres on an individual basis every two months. This income is in addition to the sale of materials at market prices.

In Buenos Aires, Argentina, informal recyclers have managed to secure special crèches supported by the municipality to cater to the needs of recyclers´ children. The city also provides infrastructure for sorting and includes the workers as partners in the source segregation scheme.

Despite the growing strength of women in the waste picking profession, they are still discriminated against, barred from access to leadership roles, burdened with child care, given no access to higher value materials, and earn less than their male counterparts. However, there are some promising achievements that have been made in the gender equality area.

Recent gender training workshops with coop members in Brazil and South Africa have given women a space to voice their concerns and interests in attaining gender equality in the workplace and increasing their political participation.

These MBOs have made significant progress in establishing ways to develop inclusive solid waste systems and progressive legislation. As a result, they have shown that these four areas of concentration catalyze positive impacts for waste pickers by:

Although waste pickers contribute to the city as service providers of (household/recyclables) waste collection, to the environment by enabling recycling, and as key economic actors that feed the market with secondary raw materials, it is worth calling attention to the fact that their livelihoods are constantly threatened. Exclusionary policies affect their earnings, such as arbitrary inspections, licenses or fees, the confiscation of materials, impediments to access waste materials, and stigmatization. Lack of permission to circulate in certain urban spaces is a common threat which impacts financial assets. For instance, in the Informal Economy Monitoring Study, waste pickers mentioned they are not allowed permission in certain areas and, in some cases, are forced to leave before they suffer some kind of retaliation or reprimand. All of these areas affect their livelihoods negatively and further exacerbate their social exclusion.

Waste pickers’ key concerns, in their own words

Recently, some waste picker leaders gathered in Belo Horizonte, Brazil, for the National Movement of Waste Pickers of Brazil Expocatadores event, expressed their main livelihood challenges. A waste picker leader from the association Amelior stressed how little support they get in France and how they are depicted as criminals. He says that Paris is planning the construction of a new incinerator that poses a risk to their already fragile livelihoods. While leaders from Argentina and Chile emphasized the importance of the implementation of a legal framework that includes informal recyclers, workers from Colombia stressed their constant battle to secure access to recyclables since the lobby of the big corporations is a constant threat to their livelihoods, even in the contexts where they have managed to have some progressive policies implemented.

Looking ahead: Strengthening MBOs is key

In spite of all the threats, membership-based organizations of informal recyclers have been very resourceful in tackling the social and economic exclusion of their members, contributing thus to a reduction in the levels of vulnerability these workers experience. By pooling collective assets and strengthening MBO members’ economic and political voice, workers can seek to enhance their channels of social dialogue.

In some countries, for instance, informal recyclers are taking part in policy dialogues, forums, and policy observatories. In Brazil, the the National Movement of Waste Pickers (MNCR) is part of the Observatory for Inclusive Recycling (ORIS) alongside universities and NGOS who collectively support their cooperative movement with research and capacity building to assist in the various processes they are engaged in. Groundbreaking developments are also happening in Turkey where waste pickers, with the support of the International Labour Organization and other partners, have managed to hold two workshops in 2016 with government officials from different levels to mobilize support to their nascent organization. As a Turkish waste picker says, “We are ready to organize under cooperatives with approximately 2,000 members in Ankara.”

As Silvio Ruiz, a waste picker leader from Colombia, has stated, recyclers are struggling to have their own voices heard, to get organized, and to influence policies. On this International Day of Waste Pickers, I call on governments to build a policy and regulatory environment that is favourable to informal waste pickers´ organizations so that they can continue fulfilling their role in creating livelihoods and protecting the environment.