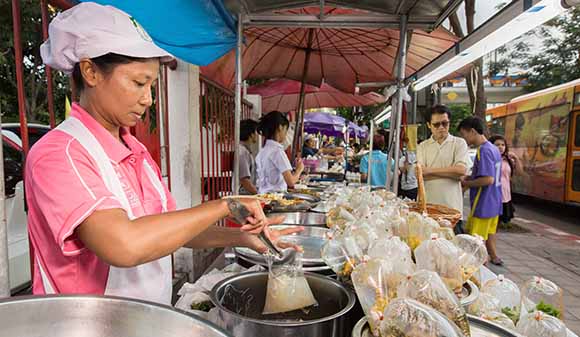 We spoke with the authors of a recently released study, "Informal Workers in Bangkok: A Scan of Four Occupational Sectors", to learn more about the role that domestic workers, home-based workers, motorcycle taxi drivers, and street vendors play in the city and about the federation they have formed to fight for more inclusive urban development.

1. Could you discuss what prompted this research focused on informal workers in Bangkok?

We initiated the research after the launch of the Bangkok Focal City project, which builds on HomeNet Thailand and WIEGO’s previous work on inclusive urban development with informal workers in Bangkok.

In the past, HomeNet Thailand and WIEGO focused their support on home-based workers, who form the main membership of the HomeNet Thailand Association. But in the last few years, members of HomeNet Thailand Association have expanded their networks and developed close working relationships with three other membership-based organizations representing domestic workers, motorcycle taxi drivers, and street vendors in Bangkok. Late last year, the four MBOs decided to come together to form a federation, now known as the Federation of Informal Workers or FIT.

In developing this research, we wanted to help FIT’s leadership understand the issues facing workers across these four sectors and Bangkok, and to provide an evidence base to support FIT’s advocacy. Worker leaders encouraged us to focus on barriers to livelihoods in each sector, challenges in accessing health services and urban housing, and the relationship between informal workers and city institutions.

Motorcycle taxi drivers are vital to transportation in Bangkok for several reasons. As urban planning experts will point out, Bangkok streets are not laid out as grids, but as haphazard sois sometimes stretching for kilometers without intersecting another street.  So how do people get from their homes to the Sky Train or Metro? Many of them take motorcycles. Motorcycle taxis function effectively as a feeder system for commuters to reach the mass transportation system.

Even so, the mass transport system is still extremely limited in terms of coverage, and most residents end up fighting through Bangkok’s incredible rush hour congestion. Motorcycle taxis help reduce the number of cars on the road and provide, by far, the fastest service to get commuters to their destination. The Association of Motorcycle Taxi Drivers estimates that they provide 4 million rides a day.

Motorcycle taxi drivers have a dangerous job, and we heard lots of stories of very serious injuries sustained by drivers, even stories in which colleagues had been killed in accidents. But we also witnessed the level of concern and seriousness drivers take in regards to the safety of their passengers. These drivers are highly professional, despite being informal.

3. One of the interesting findings of the study was that the informal workers you focused on in the study had many links with the formal sector. Could you talk about those and discuss what this means for how their role in the city should be (re)considered?

People frequently have a preconception that the informal economy is somehow separate from the formal economy; this is known as the “Dualist” school.

But this is to the contrary in Bangkok, where we can see just how much the formal sector relies on informal workers. Formal workers buy cheap, convenient meals from vendors on their way to work; use motorcycle taxis to reach the office; and rely on domestic workers to care for their children during the workday. Formal businesses contract production to home-based workers in order to reduce their overhead costs.

It’s, therefore, clear that informal workers play a structural role in the urban economy and urban system. If you suddenly took away informal workers and businesses in Bangkok, the city would have a major problem.

4. The crackdown on street vendors has received a lot of international attention. Did the study reveal any more about the effect this ban has had on vendors’ livelihoods, and the city?

We met with one group of street vendors who sell along a major road north of the city centre. This isn’t a central business district with heavy pedestrian foot traffic, which is often used to justify the clearance campaign. But the vendors had nevertheless lost their right to vend in their normal areas at most times of the day, and were being forced to sell inside small streets or at a distant market.

It’s hard to overstate the level of uncertainty and anxiety these workers felt. The loss of their space had dramatically cut their income, and one worker had had to stop vending altogether. This was having knock-on effects, with vendors worrying about whether they would be able to pay their monthly expenses and turning towards informal lenders. The vendors weren’t sure whether the policy was likely to remain in force for a long time, so they were struggling to plan their futures.

5. The recent clearing of street vendors also reveals the vulnerability of informal workers to the whims of authorities. Could you talk about some of the other barriers informal workers in Bangkok face in pursuing their livelihoods?

We were able to divide the barriers faced by workers into several main categories. Not surprisingly, street vendors were the most affected by city policies and practices. Home-based workers and motorcycle taxi drivers were most concerned about market pressures: challenges of finding clients or buyers. In the case of sub-contracted homeworkers, market pressures manifest in an unstable flow of orders. These workers could go weeks without an order and then suddenly receive an order requiring round-the-clock work to make the deadline. Here we can see that the advent of “fast fashion” has a human cost.

Domestic workers in our focus groups were very concerned about having the right skills to find other jobs in the future. This was particularly an issue for older workers, who worried that employers would discriminate against them. Others felt that they needed a totally new skill set — business management, for instance — so that they could continue earning income once they were too old for domestic work.

Workers in every sector described how larger macroeconomic trends — like Thailand's slow economy, competition from cheap production and imported goods from abroad, and increasing dominance of local chain stores — were affecting their incomes. Care responsibilities for children and elderly reduce the time that workers can dedicate to earning income, especially for women workers.

6. It seems like informal workers, such as motorcycle taxi drivers and domestic workers, actually provide important services, such as childcare and transportation, which are often considered the role of the government. Are these workers themselves able to access public services when they need them?

For this study, we tried to understand more about how workers access key services like health care and housing in Bangkok. Most informal workers want to own their own home in Bangkok, but they face quite a few barriers as a result of their informal status. Financial institutions simply will not provide loans to workers who do not have formal papers like pay slips or contracts. Many workers felt that they could afford to purchase a house or renovate their existing home if they had the same access to credit as formal workers.

Most of the home-based workers and street vendors in this study already owned their own home in Bangkok, although many live in remote locations under the National Housing Authority and lack key services and infrastructure. Motorcycle taxi drivers and domestic workers are more likely to be from other provinces and, therefore, are more likely to stay with their employers or rent accommodation in the city. But without formal housing registration, these workers are unable to participate in local elections or to access certain types of social welfare. For domestic workers, this includes the ability to register at a local hospital under Thailand’s Universal Health Coverage scheme (UC), since their employers are unlikely to register them as household residents.

Many workers participating in this study express their appreciation for Thailand’s UC system, which is generally regarded as a model for public health systems in the Global South. Several workers shared stories of receiving excellent care for serious illnesses or complex diagnoses at stressful times in their lives.

But others are more sceptical of the quality of care and medications that they receive from UC, noting that under UC they often feel like the lowest priority for hospital staff. So UC does have an image problem among some of its users.

On a day-to-day basis as well, getting basic medical care from UC can be a serious hassle that consumes time — and for informal workers, this means money. Participants described long waits and a very cumbersome referral process. They often lose their entire work day or incur costs traveling to distant facilities. Facilities tend to be closed during hours when many informal workers are available. For this reason, many informal workers make the rational decision to pay for private services, which ultimately costs them less. It’s clear that the UC system in Thailand is very important for the working poor, but there’s room for improvement to service and administrative systems to make them more functional for workers.

7. The study also finds that informal workers in Bangkok face challenges to organizing. Could you talk about some of these barriers?

Like informal workers in most countries, the workers in this study aren’t able to organize into unions because Thai labour law prevents them from doing so. Street vendors are not organized on a city-wide level in Bangkok. In many other cities in the Global South, organizations like Street Net are active, which is one of the reasons they have been so vulnerable to the ongoing eviction campaign. Domestic workers and home-based workers tend to be very isolated, which makes it difficult to communicate and effectively organize.

8. It’s exciting to hear about the newly established Federation of Informal Workers. How will it address some of workers’ challenges and what issues will the federation focus on?

Yes! The Federation is a very important development for informal workers in Bangkok and in Thailand more generally. It’s the first time that these four sectors have come together formally to support each other. It acknowledges that so many of the issues facing informal workers — lack of social protection, poor access to urban services, exploitation by employers or law enforcement, etc. — span beyond a single sector.  By forming FIT, the leaders also acknowledge that they are much more powerful as a collective voice than as individual organizations.

For the next year, the Federation has prioritized enhancing its own institutional capacity and expanding its membership. It’s also working with HomeNet Thailand and WIEGO to enhance their communications, negotiations, and collective bargaining skills through expert trainings. Leaders are also planning an advocacy campaign in support of Thailand’s Universal Health Coverage system, which is currently under attack by the military government.

9. What are the next steps with the findings of the study?

We have already been using the findings from the study to convene policy dialogues with key authorities in Bangkok. This includes the Ministry of Labour, the National Housing Authority, and the National Health Security Office, as well as officials from District Offices where FIT members are based. We are hoping to open a dialogue as well with the Bangkok Metropolitan Authority, which has initiated harsh policies for both street vendors and motorcycle taxi drivers in recent years.

Top photo: Thiphaporn Tongkham, a street vendor, is a vital part of the Bangkok neighbourhood where she sells affordable, home-cooked food. Thiphaporn spends long hours vending, preparing the food for sale, washing up after the day is finished, and buying all the necessary materials. Photo: Paula Bronstein/Getty Images Reportage