Across Peru, Municipalities are “Upgrading” Street Vendors to Roofed Markets. Is it Really Improving Conditions? | WIEGO Skip to main content

Across Peru, Municipalities are “Upgrading” Street Vendors to Roofed Markets. Is it Really Improving Conditions? 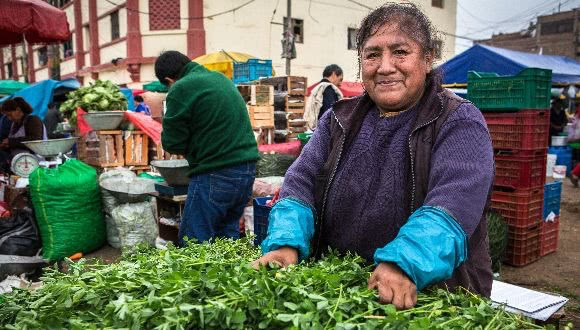 Municipalities across Peru have been employing a strategy to improve conditions for street vendors: support their movement from sellers on the sidewalks to more formal roofed markets. The transition is one that first began in Lima in the 1980s and, due to its perceived success, has been widely adopted. However, WIEGO Statistical Brief N° 16 found that this move on its own is not a solution. In fact, earnings and working conditions for market traders are not substantially better than those for street vendors. This new evidence points to the need for a more comprehensive set of initiatives to improve both street vendors and market traders’ livelihoods.

Since the Lima upgrades in the 1980s, municipalities have focused on expediting the process of moving street vendors to roofed markets at a pace that has led to many precariously built markets. According to the results of the 2016 National Census of Food Markets, almost half of roofed markets need major upgrades in their construction materials, and a higher proportion do not have adequate infrastructure for managing waste or refrigerating perishable products.

Beyond infrastructure needs, little is known of the working conditions of market traders and whether they are significantly better than those of street vendors.

Women constitute an increasing share of the 1.2 million street vendors and market traders in Peru, and they are particularly vulnerable to experiencing problems in their work.

Two-thirds of the street vendors in urban Peru are women. As licenses become more difficult to obtain, they face greater persecution than in the past, which leads to income loss, asset erosion, and physical injuries as reported in the IEMS study. While municipalities focused on relocating street vendors into roofed markets, they have also limited the number of licenses and tightened control over public space. From 2005 to the last municipal period of 2010-2014, the average number of control operations, which include evictions and confiscations of merchandise, increased from 35 to 297 in Metropolitan Lima, and from 10 to 44 in other cities across Peru. Yet the number of vendors overall continues to grow at a faster pace than
market traders.

Women market traders, without a substantial advantage in hourly net earnings, are working longer hours and are less likely to have health insurance compared to men street vendors. Their low margin of earnings may fall short of the challenges of maintaining or improving the precarious infrastructure of their roofed markets.

The transition to the formal economy requires a more comprehensive approach

These findings invite us to rethink which strategies might work best to improve both street vendors’ and market traders’ livelihoods. For street vendors, the guidelines suggested by the International Labour Organization’s Recommendation N° 204 concerning the transition from the informal to the formal economy recognize the need to include regulated access for use of public space and to ensure income security and social protection for workers during the transition. In a recent Metropolitan Lima Ordinance, which has yet to be implemented, street vendors will access one-year renewable licenses to work legally in public space if they save for a relocation project. However, as these needs suggest, transitioning street vendors to the formal economy requires national, metropolitan, and local policy initiatives that could extend social protection, improve economic opportunities, and address infrastructure needs for market traders.

Top photo: LIMA, PERU. Rosa Hidalgo Beltrán sells fresh herbs in the streets surrounding the old wholesale market, known as La Parada, in the municipality of La Victoria in Lima. Trucks bringing the herbs make a stop there around midnight to sell some of their merchandise before heading to the Wholesale Market of Santa Anita. Rosa starts selling between 4-5 a.m. To increase her turnover, she has learned about the health properties of the herbs in oreder to give advice to her clients. Her organization forms part of the National Network of Women and Men Self-employed Workers (Red Nacional de Trabajadoras y Trabajadores Autoempleados, RENATTA)—one of the organizations that is working in defence of street vendor rights. Photo by Juan Arredondo/Reportage by Getty Images.