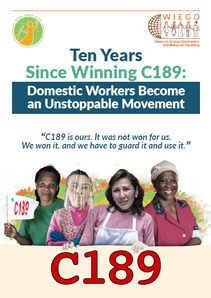 16 June 2011 was a very significant moment for the lives of the 70 million domestic workers across the globe. Finally, they had won the right to be recognized as workers, with the basic rights of all other workers. That day, the International Labour Organization – the part of the United Nations which deals with employment rights – agreed to adopt a new Convention No.189 Decent Work for Domestic Workers which sets out their rights.

In commemoration of the C189 10th anniversary, authors Celia Mather and Georgia Montague-Nelson have developed a follow-up of the booklet “Yes, We Did It! How the World’s Domestic Workers Won Their International Rights and Recognition”.

This new booklet looks at the progress made since the adoption of Convention 189 10 years ago.