To overcome barriers, informal workers need to be organized and their organizations need to be legally recognized and officially represented in collective bargaining, policy-making and rule-setting processes. They need to be able to participate in the development of appropriate policies, laws and regulations that recognize, validate and integrate their work and livelihoods.

WIEGO's work with membership-based organizations (MBOs) of informal workers has shown that having increased access to resources without the ability to influence broader external factors does not translate into more secure and remunerative livelihoods. For this reason, providing support to MBOs of informal workers is a key component of WIEGO’s work.

WIEGO and partners have developed materials and resources to support developing or existing MBOs with organizing, collective bargaining and negotiation strategies.

Organizing in the Informal Economy

Organizing gives the poorest segments of the working class – those working in the informal economy,  especially women – a way to be heard by decision makers who can affect their lives. Organizing informal workers has a long history, although recent organizing among informal workers can arguably be traced back to the founding of the Self-Employed Women’s Association (SEWA) of India in the 1970’s. SEWA is now the largest trade union of informal workers in the world with almost 2 million members.

In recent years, the global movement of organized informal workers continues to gain strength. However, despite the many benefits of organizing, the challenges are great.

For practical guidance on how to address six institutional challenges in organizing the informal economy into trade unions and important lessons on how to integrate diverse groups of workers and operators into the formal structures of the trade union movement, read the 2019 ILO ACTRAV publication Organizing Info 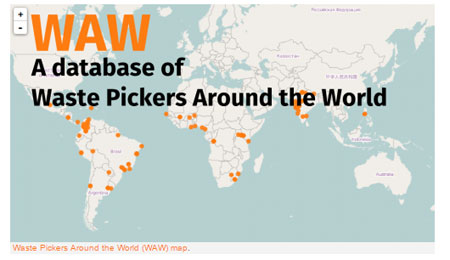 WAW - Wastepickers Around the World is the first global database on waste pickers.

However, workers in the informal economy engage in forms of collective bargaining through their membership-based organizations (MBOS) with a variety of entities who are not "employers". Street vendors most often negotiate with local authorities and with different municipal officials regarding space, fees, harassment and confiscation of goods. Waste pickers negotiate with local authorities for storage and sorting facilities or, more ambitiously, for the right to provide collection and recycling services for which they are paid. Many need to negotiate with buyers for better prices for recyclables.

Unlike workers in the formal economy whose rights are found in labour statutes, most informal workers do not have statutory collective bargaining rights. While the right has been acknowledged by the ILO (see Resolution and Conclusions Concerning Decent Work in the Informal Economy, ILC, 90th Session, 2002), including for own account workers, it has not generally been extended to these workers.

Increasingly informal workers are finding a place at the table, with national and local governments, or, in the case of domestic workers, in forums involving employers.