The Prince Mahidol Award Conference (PMAC), an annual international conference focusing on policy-related health issues, took place on January 30th and 31st, in Bangkok, Thailand. The theme of the 2017 conference was “Addressing the Health of Vulnerable Populations for an Inclusive Society”.

The WIEGO Network and Rockefeller Foundation’s Asia Regional Office hosted a side meeting titled, “Informal Workers & Universal Health Coverage: Challenges & Opportunities”. This side event featured the experiences of informal workers – who represent the majority of workers in low and middle-income countries (LMIC) – who do not normally benefit from affordable, quality health coverage, which further reinforces their vulnerability and marginalization. 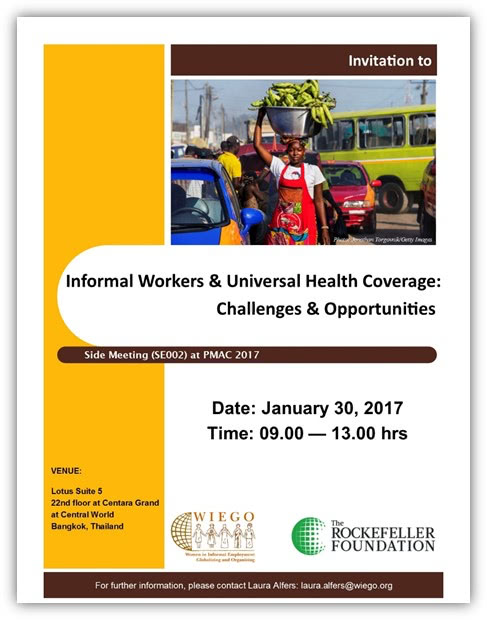 The side-event was designed to build on the success of a 2014 collaboration funded by the Rockefeller Foundation between WIEGO, HomeNet Thailand, SEWA, and Asiye eTafuleni (a Durban-based NGO) entitled “Addressing the Health Needs of Informal Workers in Ahmedabad, Bangkok and Durban” which developed models for improving health coverage for informal workers.

This side-event highlighted the ideas developed during the 2014 work, and identified progress made since then. Particular attention was paid to “what works” and “what doesn’t” by analysing specific case studies examined in the Rockefeller-funded project, including the voices and experiences of informal women workers who have been involved in creating solutions. A second objective of the workshop was to bring together different stakeholders with an interest in informal workers and health provision, to map out possibilities for future collaborative work in this field.