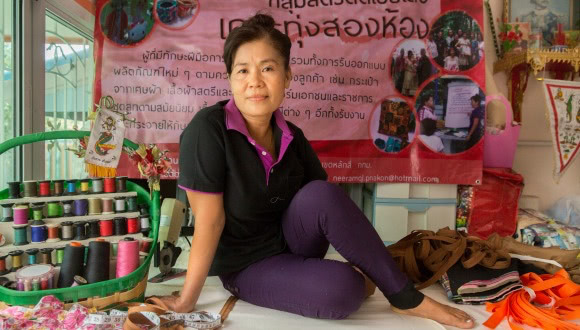 WIEGO and Slum Dwellers International (SDI) are co-chairs of the Grassroots Partners Constituency Group of the General Assembly of Partners, a stakeholder consultation mechanism in the Habitat III process. At the Habitat III Informal Settlements Thematic Meeting in Pretoria, South Africa, in April 2016, WIEGO and SDI co-hosted the side event “Informal Settlements as Productive Centers of Resident Organizing and Livelihoods.” The outcome of the Informal Settlements meeting, reflected in the Pretoria Declaration, acknowledges that informal livelihoods, women’s security of tenure, and improved basic services need to be included in the New Urban Agenda, which will be adopted at the Habitat III Conference later this year. 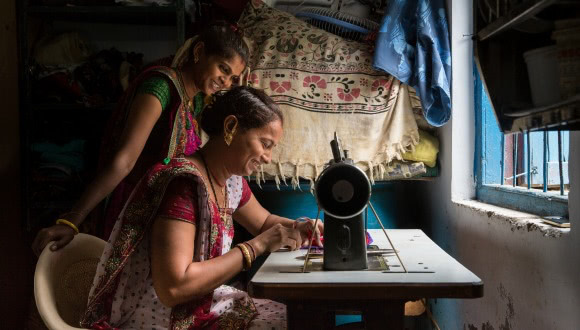 In just a couple of months, the global community will gather at the the United Nations Conference on Housing and Sustainable Urban Development – widely known as “Habitat III” – to adopt the New Urban Agenda (NUA), a roadmap for sustainable urban development on a global scale. In the lead up, discussions on informality – both informal livelihoods and informal settlements – have been front and centre, but as separate, rather than mutally reinforcing, issues. In fact, in most developing countries, informal employment and informal settlements both impact, and are impacted by, the wider economy, planning processes, and local economic development.

The interconnected nature of these different forms of informality is validated in WIEGO’s 10-city Informal Economy Monitoring Study (IEMS), which surveyed informal workers in urban Africa, Asia, and Latin America. The results demonstrate that homes are not only living spaces, but also places of productivity. Many people associate the informal economy with its most visible workers, including street vendors and waste collectors. However, even for those who work in public spaces, many of the tasks needed to make a living are “hidden”, since they take place in workers’ homes. Streetside food vendors, for example, prepare food at home before they get to our public spaces. Waste pickers often use their homes as spaces to sort materials they’ve collected. Home-based workers produce and sell from inside or nearby their homes. Even if much of the work takes place outside the home, poor quality living spaces and lack of access to basic services directly impact workers’ quality of life as residents and as workers.

The NUA, which aims to “rethink the way we live in cities”, provides a global advocacy opportunity to reframe our understanding of informal livelihoods and informal settlements. Rather than pursuing a parallel discussion, we can begin to see solutions as linked opportunities for supporting the urban poor in their aspirations for decent livelihoods, decent homes, and improved quality of life. Based on the IEMS research, here are three key ways in which informal workers’ homes and living spaces are closely linked to their livelihoods.

Homes are economic spaces for production

Housing is directly related to productivity, and basic services like water and electricity are important in order for workers to undertake even their most basic tasks. Home-based workers, in particular, use their living spaces as their workplaces. In Lahore, Pakistan, home-based workers who participated in the IEMS explained that electricity shortages were one of the main constraints to their productivity. “When there is no light, the water motor stops working and there is less water and there is darkness in the house and everything stops”, said one garment worker. Without access to a reliable source of electricity, these workers – who earn meager piece rates – can work only limited hours, which, in turn, affects their income. Some home-based workers even experience the loss of valuable work orders when electricity outages prevent them from meeting their quotas. “When there is no electricity, they cannot make dye and we receive the work late, and then our own electricity fails and we have to work around the electricity schedule, which is erratic”, said another garment worker.

Although street vendors work in public markets and on pavements, food vendors often prepare their goods, especially cooked foods, at home. And most of these cooked-food vendors are women. Across Africa, Asia, and Latin America, these food vendors all emphasized the important role the home plays in preparing to vend in public places. Water, as well as light or gas for cooking, serve as inputs in their production processes. “Cooking at home helped them because they did not have to spend on water, since there’s no water in the market stalls or at the market, and they would have to buy it in drums. They don’t live too far away, so cooking at home is of help”, explained a focus group report from Lima, Peru. Working from home also enables these workers to operate with fewer overhead costs by making use of household resources, space, and utility connections.

Homes are important spaces for storage

Homes are important places for workers who often have no other access to facilities for processing, sorting, or storage. Given the lack of space in public areas, which are often crowded, many informal workers need a safe place to keep tradeable goods or recyclable materials.

Street vendors explained that tradeable goods are often purchased in bulk, so storage space is critical to their livelihoods. “Storage for goods is important because you can keep carrying your stock at home”, said a street vendor in Nakuru, Kenya. Many street vendors actually make the goods they sell, so their homes are often both sites of production and places to store raw materials. “I buy my materials in downtown Lima; I store and make my products at my own house”, said an acrylics street vendor in Lima, Peru.

For waste pickers, whose livelihoods depend on the volume of waste they can recycle, their storage capacity directly affects their earnings. In the IEMS survey, 59 per cent of waste pickers interviewed said that inadequate space is a problem: Without storage space, they said, they cannot hold onto materials until they can sell them at higher prices; in addition, if they can’t shelter their materials, they can become degraded or ruined by weather.

Focus groups with waste pickers demonstrated the importance of workers’ homes as places where recyclable materials can be stored until they are sold on to buy-back centres. And in Bangkok, Thailand, a report on home-based workers who process plastics explained how their homes are part of their productivity cycle: “Employers drop waste plastic at their homes and pick it up when the sorting process is finished. Most of the focus group use their homes as their workplace…. Their homes do not have enough space to store waste plastic, and each must, therefore, try to find available space near their houses.” 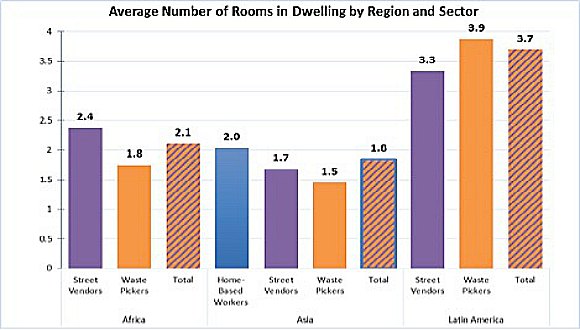 The larger their dwelling, the more space they have to store their goods. Waste pickers in African and Asian cities survyed in the IEMS have the least amount of space compared to street vendors and home-based workers. These smaller dwellings, typical of more vulnerable housing situations, also limit their economic productivity.

Access to clean water is essential for the health and hygiene of workers. Perhaps the most salient example is from the waste picking sector where handling waste poses numerous health risks. Informal waste pickers are exposed to environmental contaminants, hazardous materials, fecal waste, medical waste, toxic fumes, and chemicals. Many collect waste at open dump sites, but some also take their collected waste home for sorting and storage, which introduces additional dangers. Access to a piped water connection in the house becomes particularly important for cleaning waste so that it can be sold. However, the results from the IEMS suggest that the waste pickers who participated in the study often do not have access to clean water in their homes. Only about 25 per cent of African waste pickers and about 31 per cent from Pune, India, reported having access to clean water in their homes. 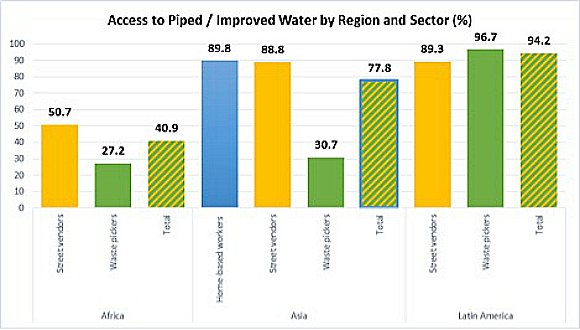 Similarly, access to adequate toilet facilities is recognized by the Millennium Development Goals (7c) as being fundamental to health and well-being. Despite this, about 2.4 billion people still do not have access to improved sanitation. The IEMS survey demonstrates that many urban informal workers, and especially waste pickers, do not have access to modern toilets in their homes or at places of work. Particularly in Africa, access to sanitation is very low (36 per cent overall), and only 20 per cent of African waste pickers who participated in the IEMS have adequate access to toilet facilities in their homes. Informal workers in Asian cities have much higher levels of access but the workers who arguably need access to proper sanitation the most, given the health risks associated with their livelihoods (i.e. waste pickers), have the lowest levels of improved sanitation. Only 8 per cent of waste pickers sampled in the IEMS from the Asian sub-region (Pune, India) live in homes with a modern toilet. 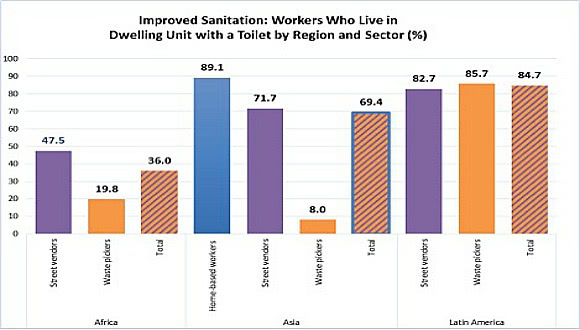 Moving forward: Planning for decent housing and decent livelihoods, together

Decent housing and access to basic services are crucial inputs to many types of work and, in turn, sustainable livelihoods play a direct role in access to decent housing. So the relationship goes both ways with work and decent housing as mutually re-enforcing for many of the world’s urban working poor – even though these two agendas are not often articulated as such. Achieving the goal of “Improving the lives of 100 million slum dwellers by 2020” will therefore require city officials, planners, and other urban authorities to reframe their strategies on urban economic development, housing, and employment to recognize and plan for homes as sites of production as well as living spaces. Hopefully, the planning, strategizing, and priority setting will be done in partnership with organized groups of the urban poor, including unions, associations, and federations of informal workers and informal settlement dwellers.