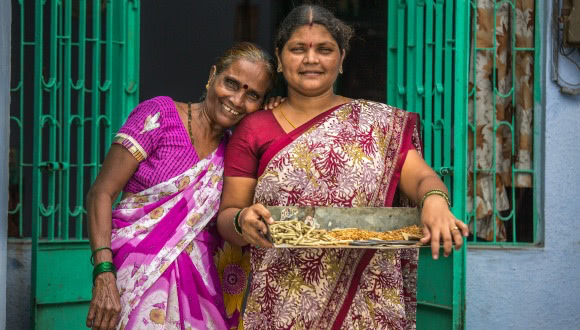 We had an opportunity to speak with WIEGO’s new Social Protection Programme Director, Dr. Gisèle Yasmeen, on some of the key trends happening in the sector today. Gisèle took over the position in April 2016 from Francie Lund, the programme’s founding director. Gisèle has done extensive research on micro- and small-scale enterprises in the food sector, particularly street food vendors. She has had a successful career as a senior executive overseeing research and related activities, and is also a Senior Fellow at the University of British Columbia’s Institute of Asian Research.

What does "social protection" mean in the context of informal work?

GY: Social protection usually refers to social security measures that help manage risks over the life course as well as poverty alleviation schemes, which can take various forms. Millions of informal workers across the globe cannot access social benefits, such as retirement funds, maternity benefits, health services, occupational health and safety (including compensation for work-related accidents and diseases), and child care. As most informal workers are poor, a health-related shock, for example, can be particularly devastating.

Why is social protection important for these workers, particularly women?

Women are more likely to be at the bottom of the income pyramid in the informal economy, while they also tend to have the most extensive vulnerabilities and risks. Women are also the ones who suffer income loss due to maternity and are ascribed caring roles for children and the elderly, which contribute to their economic vulnerability.

What are some of the barriers that prevent workers from accessing different components of social protection?

There are many different kinds of barriers due to the heterogeneity of the informal economy and the work associated with it. There are three variables that determine specific barriers:

For example, for a self-employed street trader, it may be a greater challenge to access social protections that are designed to fit within an employer-employee relationship (such as unemployment insurance) than it would be for a domestic worker. Place of work is important because it determines the nature of the risks that are faced by informal workers and has implications for the types of social protection that are needed and how these can best be delivered.

Whose responsibility is it to provide these programmes and benefits to workers?

This is an important question. There is a mix of actors who might be thought of as having roles and responsibilities. Obviously, the state, at various levels, has a lot of responsibility. This would include local authorities. However, we also need to consider the roles of informal worker organizations and the private sector, and there are successful examples to draw on when discussing the roles of these actors.

Having just returned from Asia-Pacific Social Protection Week, could you share some of the key issues being debated?

There were a lot of interesting and important issues discussed at APSPW. For example, there was a lot of discussion around access to health care, as well as the role of technology in delivering social protection in low- and middle-income countries. Thanks to the efforts of my predecessor, Francie Lund, now senior advisor to the Social Protection Programme, WIEGO was featured strongly on the agenda, and we were able to include informal worker organizations as part of our delegation, namely SEWA, HomeNet Philippines and PATAMABA.

Currently, what are three of the most pressing challenges in the sector? How do they differ from, say, 20 years ago?

We see three pressing challenges with respect to the social protection of informal workers and, hence, make these a priority. These are: access to high quality and affordable health care, including occupational health and safety; support for caring roles, particularly child-care; and income support for elderly informal workers (i.e., “pensions”).

The big difference with 20 years ago is the shift in discourse and the quality of available data. The expression “social protection” didn’t really exist 20 years ago. People used to talk about social safety nets and social security, and the informal economy was largely absent in those discussions. Since the economic crisis of 2008, the concept of social protection has come to the fore and broadened out the idea of social safety nets to look more systematically at managing risks across the life course combined with alleviating poverty. Many think of social protection as a basic human right.

Furthermore, the concept of the informal economy has been fleshed out to go beyond the “informal sector”, which is focused on the nature of the enterprise, to include informal work of various kinds. Simultaneously, WIEGO has been spearheading the availability of reliable statistics on various aspects of the informal economy, which has put the social protection of informal workers more firmly on the international agenda.

What role can the Sustainable Development Goals play in providing social protection?

The new SDGs are hugely exciting and an exceptional opportunity to move forward globally on social protection. Informal workers are such a significant proportion of the population, particularly in low- and middle-income countries, though the North is also seeing a growth in informal and precarious work. Goal 1.3 commits both South and North to “Implement nationally appropriate social protection systems and measures for all, including floors, and by 2030 achieve substantial coverage of the poor and the vulnerable”. There are also related goals touching on gender equality (#5) and decent work (#8), which help draw attention to the particular circumstances facing informal workers.

Have you come across promising examples we can learn from?

Yes, definitely. There are a number of practical examples of how informal workers have advocated for inclusion in social protection schemes and shown in what ways informal workers can benefit. Thailand’s universal health coverage system includes informal workers, and head-load porters (kayayei) have gained access to Ghana’s universal health scheme. Waste pickers in Pune, India, have formed unions and cooperatives that have helped them gain a voice to negotiate with local authorities, who now contribute to their health insurance coverage. SEWA, of course, remains a shining example of providing various types of social protection to its nearly 2-million members. Finally, several jurisdictions, including in some low-income countries, have started to introduce universal pensions that include informal workers.